Ain't no Trans in Heaven??

In nearly a decade, I think this is the first ultra religious comment I have ever received.  It came from "blessed be9, Catalyst for Christ" :

"I refuse to hate: thats Satan's tactic; however, Im gonna tell you the Truth: when we breathe our last, what do you wish to called? Aint no trans in Heaven; you cannot stay on earth. Seek help. I did. GBY (the most non-threatening piece I have ever wRITTn. Again, I dont hate; I love everyone. I would sooner die for you than see you in any other realm but where Im after your lifelong demise). be@peace."

If the truth be known "blessed" you are the hater. If you weren't, you wouldn't wish the ill will on anyone with gender dysphoria who also happen to be transgender.

As far as your question goes in what I wish to be called on my death bed is my authentic true feminine name which I have struggled so long to obtain.

Shame on you for worshiping a false God that hates!  You are right "Ain't no trans in Heaven." We have paid our dues to be decent human beings. We will be just us in Heaven.

I hope somehow you can turn your life around and make it to heaven yourself.

In somewhat of a continuation of the Cyrsti's Condo post on "Terf's", here is another idea I have seen recently which effects transgender women during their lives.

I have a young transgender woman acquaintance who has shaped herself into a very convincing woman. Even though she has transitioned well, she has what she describes as "impostor syndrome." I think it is another description for gender dysphoria.

She is quite outspoken about her life and the trials and tribulations of working while trans. For awhile, she was employed as a receptionist at a psychiatric clinic which primarily dealt with transgender patients. Along the way she left that job and decided to re-pursue her educational goals. Along the way too, she worked at a deli and was accepted by everyone except perhaps the worst Terf of all, a religious one. Daily, my friend was subjected to religious reasons she shouldn't be living the life she was.

Fortunately for her, she escaped the Terf and now is advancing quickly up the ladder of a restaurant chain. Since I worked in the same business for over three decades, I whole heartedly think her personality would be ideal for the job.

I just hope her "imposter syndrome" doesn't reoccur and get the best of her .  We all have to remember we are never gender frauds. Human beings rarely exist on the well worn gender binary. There are more than two genders. Sooner more than later, narrow minded bigots in society will have to work their way through it. Similar to the current waves of Republican bills in state legislatures around the country seeking to curtail  transgender representation in sports all the way to bills against youthful medical transgender transition. This time around, we have the groundwork in place to fight back.

Always remember...Instead of gender frauds, we are the true gender survivors. 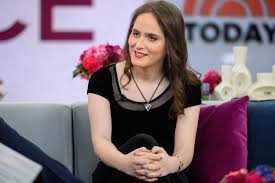 Stein is thought to be the first openly transgender woman raised in a Hasidic community, an experience she chronicles in her memoir, “Becoming Eve: My Journey from Ultra-Orthodox Rabbi to Transgender Woman,” which was released Nov. 12. Though Stein said she always felt different and was not interested in playing with boys when she was younger, she felt pressured to keep her identity secret and follow the more traditional path of living as a man, getting married and becoming a rabbi.

Stein, now 28, lives in New York City. She announced to her parents and the world in 2015 that she was a transgender woman. Stein became what is known as “off the derech,” or path, and left her insular ultra-Orthodox Jewish life and most of her beloved family behind.
at November 23, 2019 No comments:

A "Penny" for Your Thoughts

Disclaimer time kids...I never have considered myself an expert or a "theologian" of any sort.

My ideas are mine alone from experiences I have been through in an area of the country where I live and areas where I have worked down along the Ohio River - from Portsmouth, Ohio through Ashland, Kentucky and over into West Virginia.

I'm picking up this thought from the "Autumn Sandeen" post where she said she grew up in a Penecostal Church family.

My knowledge of the "Pennie's" comes from knowing a few and the fact there is a fairly sizable "Penny" church down the street from me. I worked with a disc jockey once who was disowned by his Penecostal family.

In a similar vein, I have traveled to the coal mining "hollers" of central and eastern Kentucky for funerals of friends held in "primitive" Baptist churches. One of them even recently added an addition with indoor plumbing! In one I thought I was going to have my first experience with a preacher "speaking in tongues". As he was close to going into a trance of sort over the coffin, I considered the idea he would somehow "discover" I was transgender and call in the devil.

Afterwards, I jokingly asked where the snakes were kept. I was seriously told that church was not their flavor of religion but there was one a couple "hollers" over. We could go if I wanted...hell no!

Let me add many of these people I met were in fact good solid folk but just had no wiggle room in their social beliefs. In fact I don't toss these folks into my "immoral right" category of those who may "preach" an agenda for the sake of monetary gain. Most have led a difficult life and their religion gets them through.

Sadly though, I more or less lost a  long term friend of mine who refused to even consider me being transgender and she is from the "hollers" and is back there now.  She couldn't accept me but would be on attack mode if anyone else would slander me. It's sort of like, here have a another piece of fried chicken and more mashed "taters"...now, what's this sh-t about you dressing as a girl?

You know though, I would rather face peeps like that than the ones who smile and then shove the knife into your back. Let's see, I will take another piece of chicken!
at September 08, 2013 No comments: