"The younger generation invalidating their predecessors is as old as humanity, itself. One of the joys of my parenthood has been hearing my grown children spout out with words of wisdom that I had said to them when they were younger (which, of course, they had pooh-poohed at the time). I don't expect it to be any different, as it pertains to gender identity.

As difficult as it was for those of us trans people growing up over 50 years ago, I have mixed emotions when I (not often) consider the "what ifs" of myself growing up now. As wonderful as it would seem to have been to have access to puberty blockers and other hormone therapy at a young age, those things come with a whole different set of problems for a growing (emotionally, even more than physically) child. The social and political climate today must make it so much harder for trans kids, especially those kids who had started a transition, only to have resources taken away - even the threat of it.Although I came to realize that I could have come out much earlier than I did, I can't allow myself to waste the time I have left by dwelling on that. In fact, I have precious little time left, considering the control I would have to give up, should being confined to a care facility become a reality.If I had to miss out on the puberty blockers, maybe someone will come up with a geriatric blocker soon - but I don't have time to dwell on that possibility, either. Call me an old lady, just so you call me a lady! :-)"
Thank you for the comment. I also cannot help but wonder how life would have been like if I would have been afforded the luxury of being myself.  I am nearly certain nothing comes without it's consequences, good or bad.
Recently I had the opportunity to meet a pre teen transgender girl during the Transgender Day of Visibility get together. She was obviously pleased. Here she was with the opportunity to be with an incredible group of accepting people. I felt so good for her. On the other hand though, how intimidating would it be to be looking ahead at a gender journey most certainly to be full of unexpected challenges. Plus, how would I feel if my child faced the same path. I am certainly biased but I would try every thing I knew how to help and protect my child.
As far as the younger generation goes, I agree all we can do is try to plant a seed and hope it grows. I am a believer too that when you try to brainwash a child into believing only certain ideas, once they are free from your bonds, they will go an opposite  way anyhow. Hopefully all these kids you see with anti LGBTQ signs in far right rallies will follow their own heart  and know it is wrong.
After all, the future belongs to them.
at April 21, 2022 No comments: 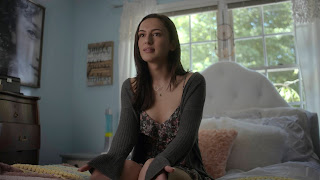 Amazon Prime Video has announced the new coming-of-age docuseries Always Jane, following transgender teen Jane Noury and her journey to live her most authentic life. Premiering on Friday, November 12, the four-part series will take an intimate look at the Noury family’s lives as they tackle obstacles with unconditional love and support.
The show focuses on Jane Noury who lives with her family in rural New Jersey. Like any teenager, she must balance friends, family, and school. It's not the easiest time to grow up but Jane is able to set her sights on life beyond her family.

Others rely on the "shock and awe" method which means just showing up as your authentic self  and let the fall out happen. I am far from an expert because I just waited for most of all the people around me to die, so I didn't have many people to tell. For obvious reasons, I don't recommend that method.

Others (such as Connie) were fortunate to have another person to pave the way for them:

"I have to say that I don't know that I could have made my Thanksgiving "debut" had it not been for my wife's help. She paved the way for me by talking to my daughters well ahead of time, giving them the opportunity to prepare their kids and husbands. I never would have just shown up with a big surprise for everyone, and I would caution anyone who might consider coming out in that way, as well.There's not a good way to come out - to family, or any other group of people. I would say, though, that there is one bad way to come out. Doing so with the attitude that it's "all about me" is bound to lead to disappointment. From the beginning, I have approached my transition as a responsibility. Every individual relationship from the past is going to change, and it is up to me to do my best to recognize and accept the feelings of each person. How I react to them is what will determine our "new" relationship. Above all, one needs to keep in mind that what has taken maybe years - even decades - for self-acceptance cannot possibly be absorbed instantaneously by another. Even if I've decided that "what you see is what you get," what I get back will always depend on the work I put into each relationship.

The way I've gone about things would probably not make for a great Hallmark production. Nothing can be tightly wrapped up in a two-hour episode; more like The Never Ending Story. "

A reminder, I tried a process similar to Connie's when it came to coming out to him and his extended family and he turned me down. We haven't spoken since. The whole process was and is nothing I am proud of.

It turns out, the coming out process is as complex as being transgender itself.