One of the first things I learned was when I entered the feminine world was how I lost almost all of my relevance when talking to men. I remember vividly jumping head long into a conversation one night with three men and getting totally patronized. I thought "Oh! Is this the way it is going to be?" Well, it was...and worse. Soon I learned I had lost most of my intelligence too.

After I had transgender transitioned into the world for awhile, I learned the truth. The idea men run the world is a myth, except for Washington. And, how is that working for us? As I absorbed what I needed to live as a woman, I learned the feminine rules I would need to survive in the real world. In other words what women did to talk around men or how they would bide their time until they got their way. The two "P's" of my new life became all too real. Passive aggressiveness and patience. Both were needed to get by in my new life.

So it may indeed be a man's world but women run it.

Sometimes I wonder what a person like Grae Phillips would think? Did he ever become so engrossed with being a female impersonator that he lost any perspective about being male at all. Or did presenting himself as a guy presenting as a woman provide him with the publicity to build a career? Since he does not read Cyrsti's Condo that I know of, I will never know.

Speaking of Grae, Connie had her own take on Phillips career being an entertainer herself:

" My guess is that his act is no longer relevant. Also, age is not a woman's best friend - especially in the entertainment industry. Shows like "Dragrace" have taken the novelty to an extreme, and this is (to paraphrase) no country for old queens. Not that Grae was ever really a drag queen, but that could be part of the problem of relevance today. Most likely, though, the whole act lost relevance for him. After all, he says that he only did the female impersonation because he was getting nowhere in show biz as a male performer.
As a singer, myself, I can only dream of having a voice in such a high register as Grae's. Still, unless I wanted to do a full-on drag act, there is not much call for a transgender woman singer these days. Of course, I don't see myself as anything other than a trans woman who sings, and I only want to be seen as that, as well. Even if I am, though, it's tough to be convincing when I'm a 68-year-old singing "Making Whoopie." I imagine that it would be the same for a female impersonator, too." 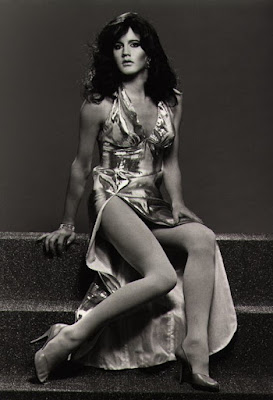 For some unknown reason, my steel trap noggin (which is seriously rusted) came up with a female impersonator from the past. Perhaps you remember too when cross dresser extraordinaire Grae Phillips took the daytime reality show circuit by storm. As I recall, Grae was a struggling singer in New York before he went the "Tootsie" route and started to perform as a woman.

I couldn't find any ideas on if he is still performing today.

Freebie and the Bean

Freebie and the Bean was a 1974 "action/comedy" film with Alan Arkin and James Caan. It was on last night on Turner Classic Movies who were doing a "collection" of Arkin's films.

If you have never seen it, the film features the best and worst of whatever you wanted to call the LGBT community during that era. The "worst" was the "hit man" was actually a cross dressing female impersonator played by Christopher Morley. (left)

Back "in the day" there was absolutely no "T" in the LGB and when we were seen in the media, it was normally in a very bad role.

The "best" part was that Morley presented incredibly well in the movie as a woman!

Fortunately today, most of that era seems to be a bad dream-like most of the cars in the movie!!! WAY back in the day when I happened along the rare picture of a female impersonator, by the name of Kim August. Of course I was entranced by the idea that any guy could look this good as a woman.  Well, she did and began working as a gender impersonator at age 15 from Flint, Michigan. She sang in her own voice which in it's self separated her from just being a drag queen.

Our feature cover today is the classic transgender female impersonator Coccinelle ( Jacqueline Charlotte Dufresnoy) who underwent SRS in Casablanca circa 1958.
at December 22, 2014 No comments:

Recently, I presented a "Flashback" post and photo on female impersonator Grae Phillips (left) who, according to Cyrsti's Condo visitor:Lynn Davis  who commented: "Grae just sort of vanished."

Indeed Lynn and here is what I think happened.


From the very beginning, Grae was a drag queen who could sing and perform as a woman, rather than a parody. Good enough to parlay her act into a singer for a real group or band.


By then, Grae was in a prime spot back then to cash in on the "real life Tootsie" idea as well as the "explosion" of talk shows eager to "expose" any cross dressing issues.


Today, all I can find is a series of sales pitches and old videos of Grae as a woman and a man.


I have also considered Grae was sort of a womanless beauty pageant winner who hit the mainstream and disappeared just as quickly when the beauty and fame began to fade.


If anyone else has any other facts or ideas, please let us know!

Grae Phillips was one of the first glamorous transvestite/female impersonators I saw back in the 1980's on talk shows such as Phil Donahue. As I remember it, Grae's story was he couldn't make it as a male singer in New York, happened (??) to discover he could be a very convincing feminine singer-with a very convincing look:

Ever consider when and why the name went from "Female Impersonators" to "Drag Queens"?  Check the vintage girls like Baby Martell and you will know why!

For Friday we are going to run a dual feature cover from the past. Vintage female impersonators Kim Christy and Kim August.

Our feature Cover for Monday is a bit different-makeup artist Joseph Harwood from the UK.

I have also included a video from his site on the Cyrsti's Condo big screen.

Our Thursday cover feature is Chris Kolonko the most booked drag artist in Bavaria.

Our Monday feature cover is Gheovanna Sartory Cruz
at March 24, 2014 No comments:

Our feature cover of the day today is a very "80's" looking Grae Phillips.  If you don't recall Grae's story, he was billed as the "original Tootsie." I still remember clearly when he made his first appearance on the Phil Donahue Show.  He couldn't land a job as a guy singer in NYC and just " happened" to throw on a dress and makeup with the help of a girlfriend and was much more successful performing as a woman.
There are tons of Grae's videos on YouTube plus you can follow the link above for a website.

Today we feature drag artist, female impersonator from Thailand Sira Soda, plus a video on the Cyrsti's Condo big screen.

From Russia with Love

Paulo Ballesteros on the Cyrsti's Condo big screen
at December 09, 2013 No comments: