I casually follow a fashion site/blog called Just Fab which "indirectly" carries my style of clothes. I love the "Bohemia" fringe colorful looks.

Frankly, I can't wear or afford most, but it's fun to "window shop."

Actually too, a long maxi skirt and tank top give me a nice slimming line I am always looking for.

So, I'm comfortable, and feeling attractive at the same time. I am approximately 5'11" too, so I am not terribly tall.

Yesterday was one of those days which I knew was going to be long, but not so sure how long.

First of all, the weather was tremendous and an ideal time to have yet another sidewalk sale at my old house in Springfield which I am continuing to clean out from literally 20 years or more of "collecting." I don't sell much but every little bit helps me to "get by" and augment my very meager Social Security. It's better than carrying a sign and standing on a corner asking for change. Can ya spare a dime brother for a poor trans vet? But...I didn't have to because...

I was successful in "moving a couple pieces" out as I grow ever closer to putting the place up for sale and went back to Sis-in-Law's to pack up and drive the hundred miles or so to Liz's. Decided to wear my best "Boho-Hippie" outfit".  A long flowing multi colored purple skirt, tank top and flip flops. It fits right in as, on the way to Liz's I go through Yellow Springs, Ohio which was (and is) a hot bed of hippie/liberal activity and  a place I have felt immensely connected to. I was dressing to blend in my mind for the past and present!

Let's "back track" a bit and mention too, the "mousse was loose" yesterday- as Liz and I call it. In my hair from when I washed it Thursday. I love to just shampoo, condition and mousse my already very wavy hair and basically just let it go. So, I went with the "460 Air Conditioning" in my Rolls Royce (4 windows down at 60 miles an hour) and headed for Cincinnati. I always love going through "The Springs" imagining I could go back and re-live just a few of those years I so admired the hippie girls with their long wavy hair. When I had my Army 'high and tight'.

Of course I can't so the closest I can come is to let my "freak flags fly"; turn up one of the Woodstock CD's I just found in my house and head on down the road. What could be any better?

Whatever label we want to stick on ourselves-cross dresser, transgender, gender fluid or whatever, our style becomes an integral part of us.  As we make the migration into the girls sandbox of the high maintenance gender, style is as big a part of our lives as most of the genetic women in the world.

Of course most of us (of age)  go through our formative cross dressing years without much guidance.  We knew what we wanted to look like from the confines of our masculine world.  If guys thought we looked like women, we passed and all was good.  Then of course, if we pursued it further, we found the world put so many other expectations on us as we transitioned.  As I have mentioned here in Cyrsti's Condo and beat it to death in "Stilettos on Thin Ice" (my book), when you play in the girls sandbox you need their approval to go forth in the world.  Everyone looks at women-especially other women.

I write often here in the Condo about my style which although it has always ran counter to many of the other cross dressers I met along the way is still a definite style.  Similar to the great majority of genetic women.  (The ones who don't where I live are the females.)

So, while I am dazzled anymore about why my posts from three years ago were so into what I was wearing and today are into what I am thinking-I took the time to pause and consider why.

The simplest answer is HRT has helped me to either give the world a highly androgynous view of me or a feminine one.  But, I thought, not so fast-I do routinely out style my genetic female friends (except Liz) and why is that?

The simplest answer to that (for my simple mind) is DUH! the most attractive women in the room are the ones who look like they aren't trying.  It's tough to do that, being genetic, transgender or cross dresser. My example is the woman on the left.  She is an example of my ideal style.  Now, just between us girls, we all know, I'm not getting there in this lifetime.

Instead, I go the next best route and try to incorporate as many of the Boho/Gypsy aspects of her style into mine.  The beaded necklaces alone represent my increased awareness of Native American and earth based spirituality.

Plus, when I go this route, I have a deeper understanding of the Stana's and Mandy's of the world.  I think I have read so much of Femulate I know exactly what would be in Stana's wardrobe and I'm beginning to learn the same insight from some chatting I have done with Mandy Sherman.

Our paths through the sandbox are the same, often the fun part is how we look getting there.  One of the oldest sayings in the cross dresser's handbook was the excuse we dressed in women's clothes only because a mans' was so boring.

All true to be certain,  but if you are not able to "let your girl flags fly", you simply will be missing much of the fun.   As you can imagine from the woman above, back in the day, I really wanted to be one of the girls letting their freak flags fly and I am over joyed the style is coming back!

BoHo and the Bad Ass Girl 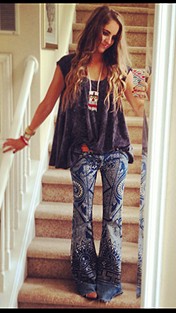 As fall approaches in my part of the world, of course fashion changes too. It's time to move my "boho" style (shown by model on left).... 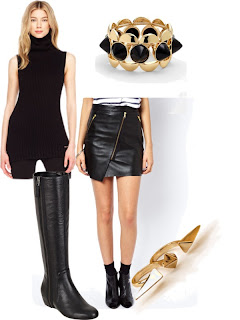 to more of a "bad girl" style with my black leather coat and boots. Shown by the model in the montage on the right.

I know what you are thinking already. "Look Cyrsti, you and I both can't and shouldn't attempt some of these looks, for any number of reasons." You are totally correct. If you are pencil thin and look like Andrej Pejic, I'm thinking you probably aren't reading this anyhow! I'm certainly neither and have the "age appropriate" fashion problems too!

What we all can do is adapt certain elements of the fashion trends to our own styles and then go deep discount shopping to find the pieces.

Remember, there is always a sale somewhere girls and I think all of these style challenges are one of the best parts of being a girl. Here's my saying "I may have not been able to pull it off but I shopped to death trying to do it!"

Here are couple of sites to further the cause Free People  and Betty Confidential to take a look at. Then if you are like me, here's the process I go through:
1.- Subtract the pieces which are age and body inappropiate.
2.- Subtract the pieces I can't afford.
3.- Check my closet for items which may be similar I can use.
4.- Value shop for new fashion appropriate pieces to add.

As I always say here in Cyrsti's Condo, thrift stores are great places to find classic adds to your wardrobe or make classic blunders.  One way or another you don't get classically hit in your finances.
at August 21, 2013 No comments: