"Shawna Wegner" is fighting a proposed bill in Arkansas which would force transgender women and trans men to use the restroom which was originally listed on their birth certificate. Now you can sign a petition to fight back. Every signature counts.

No matter where you live, legislative bills such as this ultimately threaten our very existence. Please go here to add your name!

Even with all the election angst in Washington which so effects the transgender experience, our representation under the LGBT umbrella in increasing. Even if it does have leaks.  An example was a link Michelle sent into the Cyrsti's Condo blog:

"At least 843 LGBTQ people currently serve in elected offices across the United States, constituting a 21 percent increase since June 2019, according to the LGBTQ Victory Institute’s “Out for America 2020” census of lesbian, gay, bisexual, transgender and queer elected officials.

Even with the increases, there is still so far to go. Here is more information from the NBC News post:

"“While LGBTQ people are running for office in historic numbers, we remain severely underrepresented at every level of government — and that must change,” Annise Parker, president and CEO of the LGBTQ Victory Institute, said in a statement.

According to UCLA’s Williams Institute, roughly 5 percent of U.S. adults say they are LGBTQ. According to the Victory Institute, just 0.17 percent of roughly a half million elected officials are known to be LGBTQ. The Victory Institute says that in order for LGBTQ people to achieve “equitable representation,” there would need to be 22,544 more lesbian, gay, bisexual, transgender and queer people in elected office."

Thanks for sharing Michelle!

Connie's comment about her attention from pro athlete (NBA) Shawn Kemp jogged my memory of a Halloween party when I got asked out by a future Washington D.C. politician and his wife. First, Connie's comment:

"I did join him at his table for a bit, only because there were already two other women there already. I was able to play defense long enough until the shot clock had expired, anyway. I wish I'd been able to get a pic, but this was so long ago that my flip phone didn't have a camera."

There has to be some sort of pun to use here about you or Shawn calling foul somewhere along the line. :)

Plus, the best I can offer was the the night I got all dolled up (cross dressed) for a Halloween party. For some reason I ended up leaving my wife at home and going with a news woman at a radio station I was working at.

Along the way at the party, I was approached by a couple I vaguely knew as a local politician. The party turned out to be a fun eclectic blend of people in a restored Victorian mansion.  They initially expressed their surprise I wasn't what I appeared to be. Then proceeded to ask me along to another party they were heading too.

Seeing as how I was the news woman's ride, I had to say no. It turned out to be one of those moments my life could have changed if I had been able to say yes.

I often wonder how the politician who went to Washington fared later on when he tried to pick up a cross dresser with his wife.  I can't believe I was the first...or the last.

Of course with a politician, I would never have found out the truth!

As I wrote, I don't have a real celebrity story to share such as Connie's but I do have the experience of being mistaken for a woman during a time in my life when my gender dysphoria was at it's peak. I was constantly  wondering if living full time as a woman was even possible.

Sometimes the Transgender Future is Bright

Every once in a while, I happen upon an extremely positive story which will impact the future of transgender women and men everywhere in this country.

Most of the time it's difficult to realize how much of what we face today comes from the hands of very old and white men in power. They are clinging for dear life (along with a certain base of people) to the archaic idea of making America White and Male Again is the only way to go.

At that point a story or post always comes along to give me hope. Here it is:


Samantha Boucher is on her way — both to Iowa for the 2020 U.S. Senate race there and to becoming the first openly transgender person to manage a U.S. senatorial campaign. Boucher, 24, will head Democratic candidate Kimberly Graham’s Senate campaign in the state against the Republican incumbent, Joni Ernst. 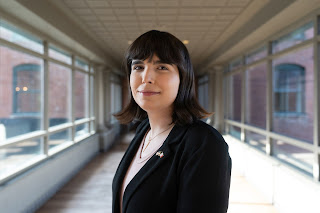 “Just the opportunity to do something so huge, to have a national impact, potentially, that really excites me, and I’m really looking forward to sinking my teeth in,” Boucher told NBC News.
Trans people are entering the political arena during an era when their rights are increasingly under attack — from a recent military ban on trans service members to myriad Republican-backed “bathroom bills.” At least 20 trans candidates have been elected to city and state offices across the country in recent elections. Prominent trans activist Sarah McBride recently launched her 2020 campaign to run for the Delaware senate.