A Transgender Change of Pace

Last night my partner Liz went to bed early taking the dog with her and leaving me with the cat to be entertained. Predictably following a good dinner I soon fell asleep watching the television with the cat on my lap. I didn't really mean to do it because the whole deal would make it harder for me to fall asleep later on. Instead of staying downstairs with the cat, I decided to get ready for bed anyhow.

Of course, as soon as I hit the bed I was wide awake and my anxieties were closing in quickly. After an hour or so I finally quit fighting my phantom fears and decided upon a change of pace. I thought about all the pleasant memories Liz and I have had in the past when we went on mini vacations north of Cincinnati in Columbus, Ohio. 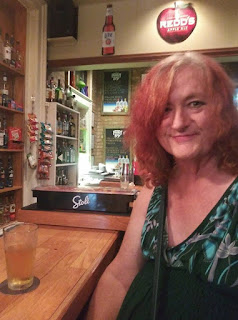 We began to explore certain venues in Columbus when I was participating in the statewide Trans Ohio Symposium. For several years I presented hour long meetings on subjects such as transgender veterans all the way to the needs of elderly transgender women and trans men. After the seminars were over, we took the opportunity to party.  And party we did!

One of our favorite venues is called Club Diversity which is located just a short Uber drive south of downtown. It's a unique place in an old Victorian house and even featured a live piano player on most of the nights we were there. The picture was taken at the bar.

As much fun as it was getting hit on by gay guys at Club Diversity, equally as fun was eating a famous burger up the street at Thurman's Café. Their burgers are so good they have been featured  on the Food Channel television network.

Unfortunately the Trans Ohio Symposium doesn't exist anymore so Liz and I have to save our precious pennies to make the trip up to Columbus for more fun and games all on our own. Columbus is a progressive LGBTQ community with a huge Pride parade so good times were had by all and I know I can't wait to go back.

I need a transgender "change of pace!"

Emma wrote into Cyrsti's Condo with a wonderful comment on how to go about achieving confidence as you enter the feminine world:

" Indeed, I agree completely that confidence is our best accessory. But how does one gain confidence? For those of us who're used to just living authentically what can we advise others?

I think there are a couple of things:1) As you progress through the world, grocery shopping, doing the mundane things, look around and notice, especially those who you wouldn't normally pay attention to. I know I'm drawn to those I admire, such as pretty, small, young. The truth is that the world is full of a huge variety of people. The message: people just don't notice most others.2) Do you remember the song "Almost Cut My Hair" by Crosby, Stills, and Nash? In it they sing about letting their "freak flag fly." While we're certainly not freaks it's fair and okay to just put ourselves out there and be, as we are.3) For most of us, no amount of makeup, padding, and other stuff is going to make us blend in seamlessly. So, get over it. Lose the excessive makeup. No one wears it, and just having all that on your face calls unwanted attention. Again, pay attention to the women you see and present in a similar way according to your own taste.4) When it comes down to that moment of taking the first step out, consider this mantra that I used to repeat to myself:"Whenever we feel fear, it means we’re up against some kind of wall … on the other side of the wall is some kind of freedom."Get to the freedom. It's worth it."
As I said, a wonderful comment! Thanks Emma!
Once you get to the freedom, there is nothing like it.
at June 29, 2021 1 comment:

Today was my virtual therapists visit. I have been very fortunate in that  I have been able to maintain my relationship with the same therapist over the years. After all, the Veteran's Administration is known for turnover. My therapist initially was the same person who signed off on my beginning hormone replacement therapy and later provided me with the paperwork to complete changing my legal gender markers.

Also, I make no secret to others that I am bi-polar and no, embarking on my often remarkable  transgender journey to change my life did not solve my overall depression and anxiety. With my therapist I was always able to explain one did not connect with the other and magically disappear.  Before I started my journey, I had experience with other therapists who kept trying to connect imaginary dots with me. So, during our sessions I am always very careful to compliment her for her help and input.

Coming up next, next week is my appointment with my nurse practitioner who monitors all my meds and bloodwork. She is also very nice and does a great job...as long as my blood work comes back OK.

Even though I have to make the lengthy drive north to the Dayton VA for my care, I rather do it for the continuity of care I receive. Rather than switch everything over to the local Cincinnati VA Hospital.