Yesterday I wrote a post concerning my limited experiences when I transitioned to a novice transgender woman and tried to date a few men. The process was a failure and then I moved on to the warmer and more responsive experience of getting to know other women as I was completing that phase of my gender transition. With their help, I learned so much on how to survive in a new feminine world. It turns out Fellow Blogger "Paula" from Paula's Place encountered some of the same pressures when she came out of the gender closet:

"  There was a time when I tried dating a few men. It never quite worked out, mostly for the reasons you too found, they were either ashamed to be seen with me, or were not attracted to me a person, but as an object. Maybe that was part of my induction into the the female world, but in the end it was not for me.

When meeting new people I'm never sure just how much of myself to reveal, I try not to out myself, but sometimes it's difficult not to, so much of my experience has been male ~ often in what at the the time were exclusively male environments. Women were excluded from some Brass Bands well into the 1980s, and for some it was still an issue into the current century! and as for sport! Do I just sit quietly in the corner, or admit to some knowledge and experience and so out myself?"
Thanks for the comment Paula. I too was afraid to reveal too much information about my previous life  when it came to men An example was when sports came up as a topic, my knowledge was at least equal to the man I was attempting to communicate with so I needed to "dumb it down" so I wouldn't scare him off.
Through it all, the point which was lost on me was all of what I was going through was in many ways the same things cis women go through on a daily basis. I read all the time of the problems women have finding a good or stable man. I used to subscribe to "Cosmopolitan Magazine" and usually their letters to the editors  had to do with how to find and hang onto a quality man. Competition it seemed was fierce as both binary genders struggled to understand each other. In fact I wrote a few blog posts years ago pointing out the virtues of dating a transgender woman. The biggest benefit to dating trans as my biased self noted was we understood both sides of the gender fence. Especially the male ego. Unfortunately dating trans never became a real thing and to this day we transgender women still remain little more than fetish objects to too many men. Not to mention the cis women who resent us entering "their" world for whatever reason.
The end result is we transgender women have to be more skillful in how we approach the world. Paula used sports as an example. Since both Paula and I played sports in our pasts and still show a passion for it, how far do we go before we out ourselves to strangers, Just another of the reasons there is always another transgender lesson to learn.
at January 04, 2023 No comments:

A Bridge too Far 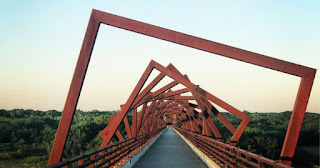 It's no big secret crossing the gender frontier to actually come out and follow a feminine transgender lifestyle is a daunting and huge move.

Personally, I am one to build too many bridges to jump off of, whether I need to or not. I suffer from anxiety along with other mental disorders. In other words I obsess completely and come up with extra scenarios. Most of which will never come true, yet I spend too much time worrying abut them.

For years I looked at the decision to do the right thing and live as a woman as sliding down a slippery slope towards a gender cliff. From which there was no return. It was easy to play the safe game and try to live as both genders...until it almost killed me. I couldn't take it anymore and took advantage of the gender bridge I was seeing. All of a sudden, instead of jumping off of it, the bridge was providing me a pathway to gender freedom and I could live as my authentic self.

To make a long story short, I was able to turn a tragic circumstance into a positive when my wife of twenty five years passed away. She never accepted me being transgender and of course the whole situation caused tremendous stress within the relationship. As I built my gender bridge and was beginning to explore the feminine world, all along the ultimate resolution (her death) was the last thing which would happen.

Bridges are funny things. Some are tall, long and scary, others are short, low and non threatening. The gender bridge is definitely is one of the scary ones. Once I decided to cross my bridge, along came hormone replacement therapy compliments of the Veterans Administration to help me. As they say, timing is everything. When I needed it most, my physical persona began to take a decided change to the feminine side.

I also was able to find several close cis woman friends who accepted me as one of their own and I learned many unwritten rules of the feminine gender.

Hopefully as you view your bridge, it is not as scary as it appears to be. Keep in mind too, what seems like an impossible crossing today may change tomorrow.