If you haven't heard, "Rude Paul", Mr. transphobe himself is going to host one of my favorite shows, Saturday Night Live.


"RuPaul's Drag Race unveiled its new crop of contestants for season 12 last week. And once again, the cast is composed entirely of cisgender men.
Transgender inclusion has long been a point of controversy for the VHI reality series. While several notable transgender contestants emerged from the Drag Race universe — among them, Carmen Carrera, Jiggly Caliente, Sonique, and Monica Beverly Hillz — only Peppermint was an out trans contestant, on season 9. Gia Gunn also competed on All Stars 4 after coming out but noted in a follow-up interview that she felt "completely disregarded" by RuPaul and the show during the experience."
Ironically, on Facebook recently I became embroiled in a heated conversation with a big fan of the privileged "Rude" one who positively makes me sick anytime I see him.
Then again, I am seeing an uptick of rump supporters too lately which I am busily blocking. For some reason, I have been running into a number of old cross dressers who really don't care rump and his minions are busily trying to erase us as LGBTQ citizens.
It wouldn't surprise me if Rude doesn't support him too.
To be sure, I won't be watching the Saturday Night Live he is on.
at January 28, 2020 No comments:

So Much for Predictions

I am really glad the election is over and my home state of Ohio didn't screw it up for the country. For what ever reason, Florida wants to keep that title. I could be cynical and say they still could be voting there  for all I know. More realistically they at the least are still counting!  Doesn't matter,  we still have an official winner-on time.

Also on time is my body shifting back to a little higher feminizing mode. I have been back on the summer dosage of hormones  for the last week  As I wrote before I had to cut back to a smaller dosage as I waited for the VA to work their magic. Now my breasts are getting a little sorer again so life is good.

In the life goes on department in Cyrsti's Condo...Let's see, playing with my big hair over the top "drag" look was fun.
My heart is still going out to all those poor folks on the East Coast who are still powerless and now are getting yet another storm.
Finally I still recoil and get physically ill at the sight of Rude Paul.

It doesn't seem possible the holiday season is almost here too.  It's a time of fun with family and friends but at the same time the loneliest time of the year for some in the transgender community rejected by those close to them.

Plus, let's not forget the Mayans predicted this was it anyhow. So I need to get ready.

Here is more proof Ru Paul is out to trash the world. 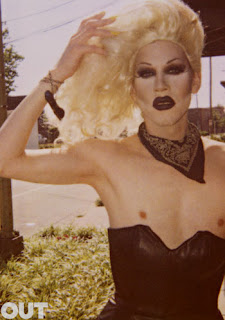 Sharon Needles who one season four of Ru Paul's Drag Race. Shown left. And my favorite view of Paul. 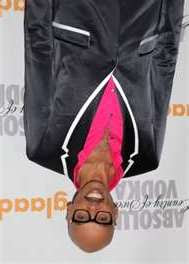 Ok girl and guyfriends, I know the word "fantasy" invokes delicious thoughts!
Sorry, kids I'm going to bring you down a bit and jump back to the "SNL" and "Craig Ferguson" shows.
The "big guys" pick what goes on of course but who wrote the garbage that slammed us?
My fantasy is to sit face to face, eyeball to eyeball with the people that write this slop.
I assume they are in NYC's "ivory tower. I lived there for awhile and the average New Yorker had very little idea of the rest of the nation that existed between the coasts. Maybe all they know is the old "Club Kids" scene or any of the "Drag Queens" in New York.  Maybe they even have met "RuPaul"! Which means they know nothing at all of us as a group. Perhaps they even saw one of the old "Church Lady" skits years ago when SNL was funny.
Maybe they missed the point that the "Church Lady" was poking fun at a particular kind of woman, not a group per se.  We all knew "Dana Carvey" was a man but he was playing a woman. Not a transgendered woman.
The SNL writers totally and completely missed all of this.  Ferguson's drivel was just that...nasty like the rest of his show designed for the substance challenged late night masses.
My other fear is that I would meet a stone cold bitch and all logical conversation would be lost! As a group we would be certainly farther behind!