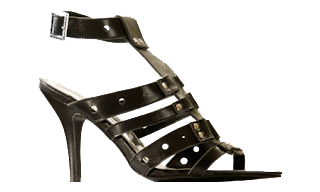 Yesterday as I was struggling through Facebook's latest meltdown, I received a message from Bernie Fatla, who owns "Le Dame Footwear." If you are not familiar, Le Dame makes women's shoes in larger sizes and specializes in  the needs of transgender or cross dressers.

Bernie let me know they (Le Dame) are having a sale you may want to take advantage of. I personally have had a pair of their shoes and can vouch for their workmanship! 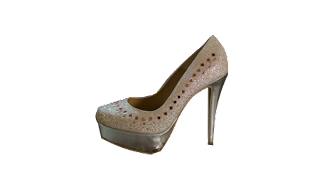 Here is your link to Le Dame's on line site,  so you can check out their sale. Plus a couple examples of shoes.

I've Fallen and I Can't Get Up!

Now what? How long before the wife get's home?  Damn heels!!!  Should have been wearing Le Dame Footwear!
Better shoes = less embarrassing falls!

"Ker Plunk!"  Welcome to the "Dad's Day" Edition here in the Condo.

Page 1.-Father's Day.  If you reside in the United States, you know of the Sunday we set aside for the Dad's in our lives- Father's Day.  Anyway you cut it, for many of us, the day has the tendency to become a bit awkward.

Yesterday I was flattered to be asked to join in when my partner Liz, her 16 year old son and her brother took their very frail 88 year old Dad out for a Father's Day lunch- a day early to avoid the rush.  The server handled it correctly when he simply said "Happy Father's Day" to all who happened to be fathers at the table.

Personally, I don't know what else I could ever be to my daughter than her father. But, still the situation could get award I suppose if my friends said "did you have a good Father's Day Cyrsti?"  I certainly didn't give birth to my kid, really don't identify with "father" anymore and love her too much to say "sperm donor" - so identifying with the "parent" word is just fine.

All you "Pops" who read the Condo though- I hope your family's still accept you and however you identify-you have a good Father's Day.

Page 2.- Movie Review.  I am almost ashamed to say this, but I saw the Showtime movie "Soldier's Girl" in it's entirety last night It's the 2003 Canadian-American drama film produced by Showtime and based on a true story - the relationship between Barry Winchell and Calpernia Addams and the events that led up to Barry's murder by fellow soldiers  In a move that would be roundly disliked today, male actor Lee Pace starred as Calpernia Addams instead of Calpernia herself or an actual transgender woman actress.

Calpernia- shown to the right.

If you haven't seen it...it's like watching the "Titanic"-you know what is going to happen and it was not going to be pretty. But Pace, on the other hand did a terrific job as well as several others of the actors involved.

I suppose to me, much of the movie was like "well, you would have had to have been there" I was- kind of. Mainly,  Addams and Winchell met up at Ft. Campbell in Kentucky and years earlier I went through basic at Ft. Knox, also in Kentucky...so as a transgender vet I certainly knew of the mind set they faced.

Two other spots in the movie tore me up (other than the obvious one when her lover was killed.) One was the first time Winchell kissed Calpernia and almost got physically sick when he found out she was a pre opt transgender woman.  In the past I did have a guy who spit on the floor when he kissed me....and...the scene at the very end when Pace/Calpernia was interviewed by the news media and introduced as "Private Winchell's cross dressing friend."  Pace played it well with a pause and a glare and finally said - yes I am his cross dressing friend.

The Back Page...This week's "back page" will also be a front page first look at next week's Cyrsti's Condo focuses.
Among other issues, we will talk about TGLBQ Pride month and what it means to us, the Le Dame Footwear special and why I am being called back in after my mammogram on Friday.
In the meantime, all of you have a great week and thanks for making the Condo a place you visit!
at June 15, 2014 No comments:

I mentioned sometime ago Le Dame Footwear was sending me some "swag" to try out and yes they have!

Most you regulars around here in Cyrsti's Condo know I'm not really a "heels and hose" type girl for a couple of reasons. But that doesn't mean I couldn't be.

On the other hand, I know most of you are - cross dressers, transgender - whatever.  Most certainly, what girl doesn't like to get really dressed up on occasion?  Plus, we all know how heels can work their magic on your legs and rear.

Starting next week, I'm going to go more in depth about my experience with the "Le Dame" footwear. Plus, since the shoes are well made and do cost a little more-we will be offering you ladies a discount!

In the meantime,  go here to check out a video- guaranteed  to capture your attention:

This turned out to be a dbl "shoe post" by accident, which could describe many of my posts here in Cyrsti's Condo.

First, for the last couple weeks I have been corresponding back and forth with Bernie at  Le Dame Shoes   which you may recall me mentioning not too long ago.  It turns out (thanks to all of you) he received a good response and wanted to do more here on the blog later.  I was flattered and said sure and in the meantime he wanted to send me a pair to try out for my own.  Initially I said, I wasn't a "heels" type girl and he said I might be in his shoes. Even though, I'm sure there are a certain percentage of your cynics who read the Condo already are thinking "Cyrsti got paid off with swag" (Connie) but it is true - I do love the shoes. I will have more to pass along later!

Speaking of Connie and our mini grammatical discussion of the book title (and a pesky apostrophe). She sent in this comment:

Well, I just assumed that you had but one stiletto on the ice, so "(My)Stiletto's on Thin Ice" would be correct. I'm also imagining your other foot, the one on solid ground, would be in a combat boot. Not too different from your one foot on the platform; the other foot on the train (not that the shoe need be a platform in this scenario). Anyway, if you need a proof reader or copywriter, just send your manuscript to me. Be aware, however, that this old teacher uses a lip liner pencil for corrections. :)

Connie, I'm fairly sure you would charge me mega dollars for all the lip liner you would have to use!  Plus you need it more than the book does! I can't wait for your new book "Smootchless in Seattle"

I have decided to let the red marks lie where they fall and just get the thing published...I'm sure my old writing teachers will be spinning in their graves.
at May 23, 2014 No comments: 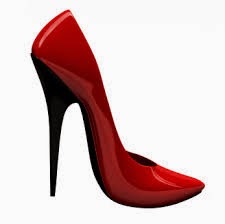 I thought you may be interested in a store who recently reached out to me with a follow on my Twitter account:
It's called  Le Dame Footwear and here is what they are all about: (from their site)

We are committed to bringing our customers fashionable, feminine-styled footwear in a large shoe size. Our high-quality, affordable footwear is designed to specifically to meet the needs of customers who wear a women’s size 10 ½ to 17 (wide) or a men’s size 9 to 15 (medium) in the latest styles. With reinforced heels for added stability and cushioned insoles for added comfort, Le Dame Footwear is crafted to accommodate the length and width of the larger foot. Our unique designs allow our customers to purchase a true large size that is both fashionable and sturdy, eliminating the need to choose between style and fit and giving you a product that you’re proud to wear. Le Dame Footwear is headquartered near Madison Wisconsin.