"Ker Plunk!"  Welcome to the "Dad's Day" Edition here in the Condo.

Page 1.-Father's Day.  If you reside in the United States, you know of the Sunday we set aside for the Dad's in our lives- Father's Day.  Anyway you cut it, for many of us, the day has the tendency to become a bit awkward.

Yesterday I was flattered to be asked to join in when my partner Liz, her 16 year old son and her brother took their very frail 88 year old Dad out for a Father's Day lunch- a day early to avoid the rush.  The server handled it correctly when he simply said "Happy Father's Day" to all who happened to be fathers at the table.

Personally, I don't know what else I could ever be to my daughter than her father. But, still the situation could get award I suppose if my friends said "did you have a good Father's Day Cyrsti?"  I certainly didn't give birth to my kid, really don't identify with "father" anymore and love her too much to say "sperm donor" - so identifying with the "parent" word is just fine.

All you "Pops" who read the Condo though- I hope your family's still accept you and however you identify-you have a good Father's Day.

Page 2.- Movie Review.  I am almost ashamed to say this, but I saw the Showtime movie "Soldier's Girl" in it's entirety last night It's the 2003 Canadian-American drama film produced by Showtime and based on a true story - the relationship between Barry Winchell and Calpernia Addams and the events that led up to Barry's murder by fellow soldiers  In a move that would be roundly disliked today, male actor Lee Pace starred as Calpernia Addams instead of Calpernia herself or an actual transgender woman actress. 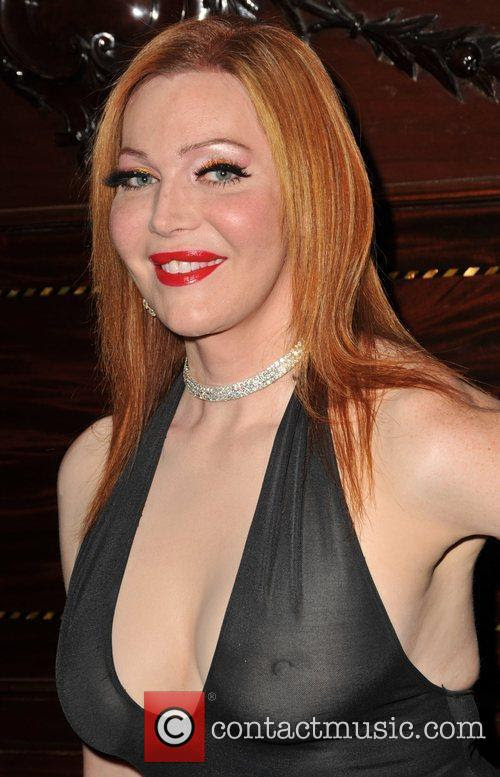 Calpernia- shown to the right.

If you haven't seen it...it's like watching the "Titanic"-you know what is going to happen and it was not going to be pretty. But Pace, on the other hand did a terrific job as well as several others of the actors involved.

I suppose to me, much of the movie was like "well, you would have had to have been there" I was- kind of. Mainly,  Addams and Winchell met up at Ft. Campbell in Kentucky and years earlier I went through basic at Ft. Knox, also in Kentucky...so as a transgender vet I certainly knew of the mind set they faced.

Two other spots in the movie tore me up (other than the obvious one when her lover was killed.) One was the first time Winchell kissed Calpernia and almost got physically sick when he found out she was a pre opt transgender woman.  In the past I did have a guy who spit on the floor when he kissed me....and...the scene at the very end when Pace/Calpernia was interviewed by the news media and introduced as "Private Winchell's cross dressing friend."  Pace played it well with a pause and a glare and finally said - yes I am his cross dressing friend.

The Back Page...This week's "back page" will also be a front page first look at next week's Cyrsti's Condo focuses.
Among other issues, we will talk about TGLBQ Pride month and what it means to us, the Le Dame Footwear special and why I am being called back in after my mammogram on Friday.
In the meantime, all of you have a great week and thanks for making the Condo a place you visit!
Email Post
Labels: calpernia addams Cyrsti's Condo. Le Dame Footwear pre opt transsexual woman Soldier's Girl Movie Soldier's Girl. Lee Pace transgender actress transgender veteran