No Work for Delhi's Transgendered Models

From the "Hindustin Times"
While Australian male model Andrej Pejic has struck million-dollar deals shooting for women’s clothing, Delhi’s own transgender models, as stunning as they look, are denied a fair chance thanks to homophobia. 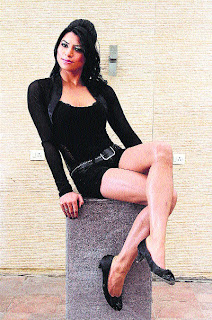 Saloni (born Rahul Monga), with her porcelain skin, dimpled cheeks, and 36-24-26 frame, can give a complex to any woman. But, when the 21-year-old law student approached a coordinator with her portfolio and admitted that she was biologically, a man, he demanded a hefty fee for her ‘unusual gender’. “After keeping me waiting for months, he pushed me out of his office saying ‘tum to na aurat ho na mard ho, tumko kaun kaam dega.” (you are niether man nor woman, who will give you work)
Chahat (born Danish Khan), 23, the winner of Queer Queen 2010 (a beauty competition organised by Space Foundation, a gay rights NGO), could also never get a break due to discrimination. “I have always wanted to model and after winning the competition, my confidence shot up. Coordinators were very impressed by my pictures, but when they got to know about my gender, they asked me if I could please men, and shooed me away,” she says.
Modelling agencies say it’s not easy to convince clients. “Not many would be convinced about using transgender models for a shoot,” says Pranav Awasthi of Glitz Modeling. Others feel it’s time the industry got rid of prejudice. “A person’s gender is of no concern to a designer. If a transgender blends into my concept, I will work with her,” says designer Rina Dhaka. Ad guru Alyque Padamsee says, “Transgender models must write to the Advertising Standard Council of India against discrimination.”
Email Post
Labels: crossdressers cyrsti hart cyrsti's condo trans girls TRANSDESANCE transgender blog transgender fashion transgender life transition transsexual transvestite transwoman