Saturday night we met with a few old acquaintances for dinner at the upscale Italian venue we normally go to.

I got dressed up as far as I normally do with my fancy patterned leggings along with a nice sweater and a new knitted neck cowl Liz just made for me. As we entered the crowded restaurant, I received the usual amount of attention my arrival usually attracts. No matter how you cut it, I am not the tallest woman in the room but there is very little I can do about my big boned body. To make matters even more interesting, for dinner I washed and moussed my hair with a different hair product which adds volume as well as curls. Seemingly my hair took on a life of it's own. I had plenty of volume and curl.

Dinner proceeded smoothly until the very end until it was time to pay our bills. We had a new server who was struggling through our maze of orders and demands. Then, to add insult to injury our server had to try to decipher the different discount cards everyone carried. Liz and I had a ten dollar off email coupon she had emailed to her. It took the server two tries to get it right. In the meantime, we all noticed we had the same male name on our checks. It turned out he ran all the checks discounts under the name of the person at the table who very much didn't want to be outed. It was humorous as the other very out transgender woman kept asking who it was.

Needless to say the outed person was very upset but is such a basket case anyhow, so I for one didn't care how successful or who he was in his male life. But Liz couldn't help herself and came home and researched the cross dresser on Google. What Liz found out made sense. The person is from a small Indiana town and is active as an oil company owner and developer. It's no wonder he makes a big deal of knowing the most closeted gay guy in America, Vice President Mike Pence who is also from Indiana.

So, all in all it turned out to be an interesting evening. As I said before though, He doesn't have to worry about me outing him. As you noticed, I didn't even use his name in this post.

A Wealth of Riches

It seems recently I have been overwhelmed by the possible amount of material I have received for my Cyrsti's Condo blog. Believe me though, I am not complaining. Often I go weeks on end trying to come up with something to write about. Over the years I have somehow come up with over six thousand posts. Thanks to all of you such as Connie, Paula and Mandy who help out with content too. Then there is everyday life.

For example, Thursday night Liz and I went to the Christmas party for transgender-cross dressers and their families. I had a very good time as most of the people around our table I had known for quite a while, Several were cross dressers from small towns in Indiana who were complaining how hard it was to remain in the closet where they live. On the other hand, we were able to sit close to the very accomplished 80 year old role model I have mentioned in the blog before. She has done an amazing job of being accepted in society as her true self. 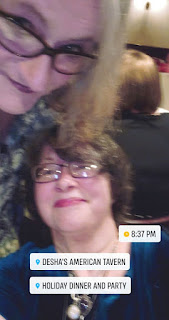 Liz did manage to take one selfie to share. I know it's not the best quality but it is all I have.

Also on the plus side, Liz managed to win the "split the pot" lottery which everyone could pay to take a chance at. So we were able to recoup the forty dollar per ticket amount.

This is just a small amount of items I want to share with you all and we will get to a couple new transgender women who are making a difference.

Plus, we have another couple of events coming up this weekend, one never knows what will happen to write about!
at December 21, 2019 No comments:

Not a Ghost of a Chance

Way back when I started Cyrsti's Condo, little did I think I would be writing a post about going ghost hunting. But never say never! 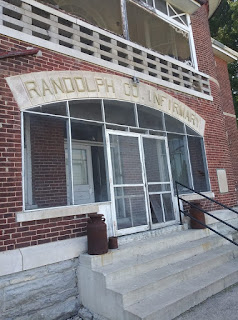 Saturday we packed up for an all nighter and headed on a two hour trip Northwest to join a group of people I never met before to investigate the Randolph County Infirmary not far across the border in Indiana.

Even though Liz and I watch quite a few of the ghost shows on television these days, I still classified myself as kind of a skeptic.

Not anymore! This turned out to be quite the paranormal adventure. Plus, it turns out one of the Travel Channel shows was following us into the place to do their own ghost hunt.

As far as anything being remotely tied in with a transgender topic, I had to get through the increasingly major hassle of reminding the others of my true gender. After I told the head guy though, everything seemed to go OK.

Of course I wasn't dressed to impress in an old pair of jeans and a t-shirt Liz bought me in Colorado.

Finally, I was not fortunate to have seen a full apparition, but I did feel one a couple times and heard several highly suspicious noises. The place was definitely haunted.
at August 06, 2019 No comments:

Do the Right Thing

Well, as it stands now, the dominoes have started to fall in the direction of the LGBT community, starting in Indiana. Having said all of that-I have not started my happy dance yet.

It was interesting to me all the different directions where supporting our discrimination came from this time. First and foremost of course the was the omni present religious right. Very simply, they love to make us a very scary example of society's moral decay. Oh, by the way-don't forget to throw whatever you can't afford in the alter plate to build another "super church" this Sunday.

Then-there were who thought simply extending American rights to the LGBT population represented extra government "interference" in society. That was true of course but is far from the first time Just take the Women's Suffrage Movement or the Civil Rights Act of 1964 as examples of our government doing the right thing. Come on now-did all those members of American society deserve equal rights? Generics gaining the right to vote was the beginning to the end of America as we know it?

That's all good but as we all know, perhaps the biggest factor in Indiana's reversal was money.

Many of you who don't know, the state is not just the bucolic, basketball rural state from the classic Hoosiers Gene Hackman movie. It does have it's rural parts of course (as does Ohio) but it also has big cities too, including one called Indianapolis which hosts such "small" events such as the Super Bowl and The NCAA Final Four Basketball Tournament. In case the people in the churches and the conservative legislative community haven't figured it out yet- JOBS are coming more and more from diverse based companies. PLUS, the competition for those companies in this part of the country is incredibly intense. The Cincinnati or Dayton Ohio mayors weren't playing when they said they would welcome Indiana's business.

So here we are, with a little breather. What does it mean on the grass roots level to the typical transgender woman and trans man looking for passing privilege? Very simply, not much and everything. I already know where I can and can't go for the most part. And I am not looking to go to redneck bars on the east side of Cincinnati when Liz and I can go down along the Ohio River and sip coffee or an adult beverage. To the owners there, Liz and I are simply green not lesbian or transgender.

For whatever reason, the right thing happened in Indiana-for the moment. Just have to relax, enjoy it and look for the next challenge. It's just part of the LGBT existence.
at April 03, 2015 No comments:

Indiana Jones and the Legislation of Doom

Connie commented about Indiana:" Indiana, where it's OK to have a Basketball Jones, but not so much if I'm Basketball Joan. Basketball is the major religion for the state, is it not? I'm wondering, though, why it's still legal to run a man to man defense." Almost Connie. Basketball IS the religion in nearby Kentucky!

Then, this comment from Pat really got me going this morning:   It seems that this is a recent case of the left using a flawed premise to bash a Republican. The language of the new legislation is taken from the federal freedom of religion law signed by Bill Clinton. It is also in line with the legislation of about half the states including the legislation voted for by Obama when he was an Illinois legislator.
As I understand the legislation it is a preclusion against government action against a person with clear and estanblished religious beliefs it is not a blanket right to discriminate as is being presented by those whose politics are not in line with the current governor or legislature in that state.
Pat

Number 1.- How dare you play politics with my life??? I don't give a rats behind less if this came from the left or the right?  I guess the bottom line is Pat, you can feel good about yourself that you are carrying the banner of knowledge when you dress as a woman and go out and then turn around and say denying human rights is OK?
Number 2.- I am certain you have read or heard by now, Indiana's law is NOT the same as the others.  (Read on below.)
Number 3.- Pat, riddle me this...why does every challenge to me living my life as I please with the access to basic American freedoms come from the so called right?
Number 4.- Walk a mile in any LGBT person's shoes and then you will understand why there is a 41% suicide rate. And, don't be crazy and tell me this is an "apples and oranges" issue.

A  Washington Post article largely mirrors the argument advanced by Indiana Governor Mike Pence. Appearing on ABC’s This Week, Pence claimed “Then state-Sen. Barack Obama voted for [the Religious Freedom Restoration Act]. The very same language.”
The same argument is parroted on Fox News and elsewhere.
It’s not true.
The Indiana law differs substantially from the federal Religious Freedom Restoration Act, signed by President Clinton in 1993, and all other state RFRAs.
Go here for another look.
(Disclaimer, this is one of those evil leftist sites-kind of like the CBS Morning Show legal analyst Tuesday morning.) She very succinctly outlined the differences and then went on to say why big diverse companies can locate to states who have protections on the books for LGBT persons and not to states like Indiana and others who don't.

Then again, Rush Limbaugh sent a letter to Liz's Dad yet asking for money and telling him Obama is going to run for president-for life.  He will be coming after me next!