Once again, Thailand makes transgendered news. This time though NOT through some crazy "lady boy" story or the ancient over blown transsexual stewardess story. 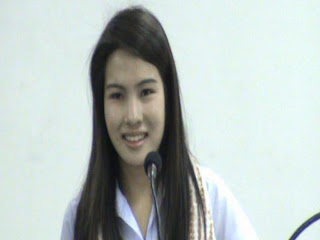 From "The Nation" comes the story of "Inthukorn Sitthiwong":
"Unfortunately, she's being asked not to teach - at least not in any way that she could maintain her honesty and dignity.
In her third year at Chiang Mai University's Faculty of Education, Inthukorn was "advised" to start getting used to the idea of wearing a male uniform for her final year of training as a teacher - despite the fact that she's been a woman all her life.
Yes, she's one of many transgender women across the country who aspire to become teachers. The difference is that, while everyone before her obeyed the dictates of the regulations and bowed to social pressure and the threat of being flunked, she's not going to pretend to be someone else.
Fifteen years ago, Rajabhat teachers' institutes announced they would reject "sexual deviants". The resulting public uproar forced them to back down, but it's an open secret that many applicants fail interviews or are steered to other fields because of their gender identity.
Inthukorn's case has brought back to the surface the debate over whether LGBT people should be allowed to teach.
The basis of the opposition is the fear that children will "copy" their transgender teachers. Science is beginning to understand the roots of gender identity, and there is so far no evidence that this fear has any basis.

The U.S. was given a little praise in the article.

"
Even in the US, a society far less familiar with transgender people than Thailand, there has been growing acceptance of transgender teachers. In addition to serving as role models for students who wonder if they too are in the wrong gender category or have already decided, it affords all students a lesson in tolerating diversity.
"The world is full of people and beliefs that not all of us agree on," one Thai parent was recently quoted as saying. "You can't just tell your kids that if they don't like it, they should leave. You need to teach them that they don't have to agree with another person's beliefs, but they must respect those beliefs."

In another life in another year far far away, I was lucky to experience Thailand for a year during my military service. "Chiang Mai" was rumored to have the most beautiful women in the country.