My wife Liz and I went out to vote yesterday when she got off of work. Without becoming too political, of course I voted mostly the Democratic ticket since the other party seems to be more involved in  erasing transgender people everywhere, not to mention attempting to control women's reproductive rights. That is all I am going to say politically. 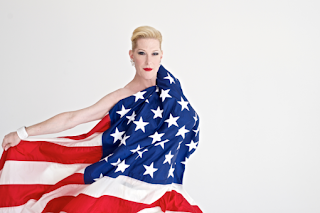 Even more important to me is the fact I was able to exercise my rights as a citizen as a female on my state drivers license which you have to present in order to vote. It is very special to me because years ago voting with my new female drivers license was the first time I had the opportunity to use my new legal ID. All things considered, changing over most of my legal gender identifications was not too difficult even in Ohio. Back in those days though, Ohio hadn't yet changed the rules on changing your gender on your birth certificate and Social Security was still  into changing names only on their records. Not gender. It hasn't been very long since both of these procedures have changed. Social Security being the most recent.

In addition to changing all my civilian legal documents, I had to change my gender on all my Veterans Administration records. With the unwavering help of my therapist I was able to change my gender with most all of my VA documents. So I have a Veterans identification card marked female as well as being female on my records. Ironically, the VA is updating all it's records and they are now asking how I wish to be referred to. So I updated my records to transgender lesbian, she and hers. Naturally I was surprised when I was asked about my preferences.

Overall, changing your legal gender markers, is a big move. It goes way past just choosing a new name. For me choosing a new legal name represented another milestone in my journey to a feminine life. No longer could I change my name as quickly as I changed my wig. I can't tell you how many names I used before I got together with my daughter and decided on my new name I would carry with me until I died. I went back a couple generations and selected a name from my mother's side of the family and selected my own Mother's name as my middle name. It made more sense to me than the old male name I had naturally but even more so because I could honor my family and heritage with my new name. My new legal  name I feel would have been approved by my mother.

All of this usually comes to my mind everytime I am able to vote. Plus it is also a chance to get out into the community and exercise my right to be myself...my authentic self as a transgender woman. Plus if you don't vote, you don't have any reason to complain about the results of the election. For my efforts yesterday I was thanked by a male smiling poll worker, voted and received my sticker. And, since yesterday was also Liz's birthday, I took her out to dinner after we were finished at the polls.

I wonder as I grow older if voting will still have a special place in my heart as the first place I was legally recognized as my true feminine self. As I proudly showed my identification with gender marked as a "F". The way it was always supposed to be.