"Make Up For Ever is setting an important precedent in the beauty industry. The brand has tapped transgender model Andreja Pejic to be the face of their latest campaign, making the leggy beauty one of the first transgender models to land a major beauty deal (Pejic joins Brazilian model Lea T —who partnered with Redken in 2014—in leading to change in a largely cisgender-dominated industry). "I prefer doing shoots," the 23-year-old reveals in the interview. Time magazine last year for a feature titled "The Transgender Tipping Point," which explored how the acceptance of transgender individuals is the next social frontier in the U.S.)."

I just saw this on my Yahoo News Feed: 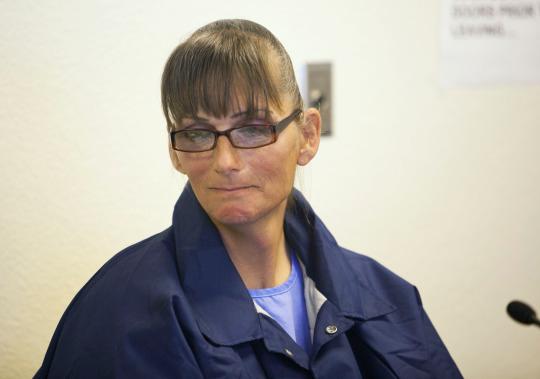 "Inmate Michelle-Lael Norsworthy smiles after a parole hearing at Mule Creek State Prison in Ione, Calif. She is locked in a legal battle with The California Department of Corrections and Rehabilitation over her request for sex reassignment surgery. (Photo: Steve Yeater/AP)

The Supreme Court will announce whether it has found a fundamental right to same-sex marriage any day now, dramatically altering the course of gay rights history. But a much lower-profile case that is currently wending its way up through the federal courts could offer the Supreme Court an opportunity for another potentially transformative decision on LGBT rights as soon as next year."
And, for those of us who think change isn't coming fast enough (it's not) I still am amazed at these numbers -again from Yahoo who questions the reasons behind the little "t" along with the big "G"and "L" in the LGBT grouping:
" The transgender movement has always lagged a bit behind. One reason is that while most Americans now say they know a gay person, the vast majority does not know a trans person. That is beginning to change, according topolling by advocacy group the Human Rights Campaign. Twenty-two percent of likely voters now say they know a transgender person, a five percentage point jump from even just one year earlier. And that’s already affecting public perceptions: 44 percent said in January that they viewed trans people favorably, compared to just 26 percent in 2011."
Wow!
at June 17, 2015 No comments:

Life has been moving so fast for me again, I have neglected to pass along the latest transgender person to venture out into the world, stay in the world and make a difference.  Her name is Jazz Jennings and she probably is not a stranger to you. If you didn't know though,  (from Yahoo News and Katie Couric)Now, at 14, Jazz has co-authored an illustrated memoir aimed at children called "I Am Jazz." The book chronicles the early years of Jazz's life, from her diagnosis to her struggles at school, and it's not just for kids in the LGBTQ community but for anyone who feels like they don't fit in. All of this comes just weeks after being named one of Time magazine's "25 Most Influential Teens of 2014."


Looking back, I can try hard and remember when I was 14 (maybe) and  how I would  have had no way to imagine now how wonderful and exciting it would be to get up, turn my computer on (huh? couldn't do that -they were as big as my room) and see one of Time Magazine's 25 top teens was transgender?
We will attempt to discuss the "golden age" of gender transition in a future post in Cyrsti's Condo!
at October 24, 2014 No comments:

" The president of the fast-food restaurant chain Chick-fil-A has once again injected himself into the gay marriage debate, this time criticizing U.S. Supreme Court rulings. Dan Cathy posted a comment Wednesday on Twitter criticizing a pair of U.S. Supreme Court rulings. Those decisions will extend federal recognition to same-sex marriages in the states where they are legal, and will add California — the most populous state — to the 12 others in that category. "Sad day for our nation; founding fathers would be ashamed of our gen. to abandon wisdom of the ages re: cornerstone of strong societies," Cathy wrote, according to The Atlanta Journal-Constitution (http://bit.ly/12qjRKF ). The post was later deleted. Chick-fil-A issued a statement acknowledging the post, saying Cathy was offering a personal comment. "Dan recognizes his views do not necessarily represent the views of all Chick-fil-A customers, restaurant owners and employees, so he removed the tweet to eliminate any confusion," the company said."


Why did the chicken bigot delete the text? My car has shown it can drive right by any of his units and right to his competition.
at June 28, 2013 No comments: