Ironically, yesterday turned out to be a quiet day when it should not have been.

It all started out with my therapist's appointment. Instead of  a video visit, the link wasn't working so we just did it over the phone. So all my work with hair and makeup to get ready went nowhere. Fortunately, later on in the day I had another Zoom meeting to attend which I didn't have to get ready for.

Between the meetings at the least I could watch the Cincinnati Reds baseball team who were playing a day game. Which they won.

You Cyrsti's Condo regulars may know I am bi-polar and for some reason yesterday was one of those days I couldn't summon much energy at all. By the time my Rainbow Alliance Board meeting came along at 6 PM, I felt as if I had no ambition for the meeting at all. Normally, it wouldn't have been such a big deal but his time there were a couple of workshops coming up I wanted to volunteer to assist with.. One of which is in June and the other is in September, so I still have plenty of time to volunteer for one date or the other.

On the bright side, I received a very positive return comment from "Jenny" whose blog I just featured. Plus I am very fortunate to have a strong support system around me to help me when I am down. Including my meds from the VA.

I am feeling better today.

Recently I wrote a post here in Cyrsti's Condo revolving around the concept women are definitely the high maintenance gender. Being the hard headed person I am, it took me years to learn exactly that. As my wife at the time kept referring to me as the "pretty, pretty princess" in my makeup heels and hose, no amount of feminine presentation could help me to understand exactly what she meant. It wasn't until years later as I seriously started my Mtf gender transition did I understand.

Let's check in with Michelle and her feelings on the subject:

"I see that you, as well as so many of us have discovered, that being a woman requires many years of life lessons learned while growing up.Females start very early in life learning so many skills, that men would never even think of, like communication, relationships, mannerisms and dealing with the trials and tribulations of dealing with the female body. It's one thing to learn how to apply makeup and clothes styles but women don't really get those lessons till early in their teens. Women start early learning that the somewhat care and feeding of their bodies will follow them throughout life.Men on the other hand only deal with learning to (as my partner once put it) grunt, fart and learn how to somewhat intimidate the people they come in contact with. For women, life's lessons are almost harder in the long run then men will ever know.

Women have to learn, starting very early, how to deal with so many aspects of their bodies and minds that can be both scary as well as rewarding. Men on the other side of the coin only have to learn only what puberty brings them. It's more of a one shot deal for men. Women have to deal with it all their lives. "

I have always thought cis women have precious little time to design their lives around their bodies. After all. girls go through puberty earlier than boys to face years of having babies and monthly periods before their bodies then go through menopause. Through it all, women face the lack of gender privilege which men take for granted.

Spreading a bit of love here in Cyrsti's Condo as we approach 2020: 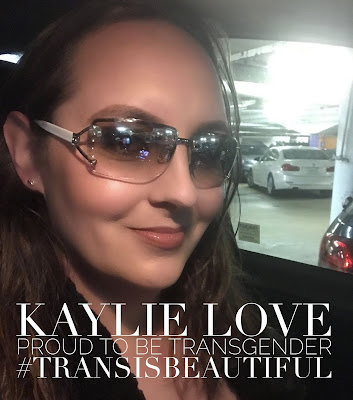 Saturday I was supposed to meet another of the 'family' for lunch. To be fair, I don't how she identifies; crossdresser, transgender, or "gurl". We were to meet in a very well known coffee and sandwich shop (not called Starbucks)  but for whatever reason, coffee with her never happened.

Since I had arranged my day to meet her, yes I was more disturbed than I normally am. If you are backing off-tell me. Won't be the first time. Saturday's deal is not the point of this post though.

I began to wonder how many under the LGBT - CD umbrella over the years I have met (even if on Facebook or comments to Cyrsti's Condo) who have faded away. Or abruptly disappeared.

I could probably go on, but you get the point. Plus, I need to say I only really know in person a couple trans people-one woman-one man. Then, here on line, I can claim several more like Connie, Shelle, and Stana (who I have met once) and Paula. Then, there are the transgender veterans like Carla Lewis who I share an extra bit of history. (Shelle again too.)

I guess I should look at the point of this blog as a positive influence on potential LGBTQ family members. If I can shed any light on the process, my work is complete.

Just one thing, if you want to meet me for coffee-don't stand me up-please.

Cyrsti's Condo "What If"

Not too long ago here in Cyrsti's Condo, I wrote a post about taking different paths to where we identify today as transgender, transsexual or cross dressers.

As I said in the last past, I'm far from smart enough to figure out where we end up on the spectrum.  Is it all an internal process which we were born with, or more of a reaction to external stimulus or a mixture of both?

Most certainly, if you are satisfied with occasionally cross dressing as your non birth gender, you probably were influenced by external factors sometime earlier in life.  But what about the rest of us?

Oh, if it were only as easy as flipping a switch! I've found it to be more like shifting gears - as with a 10-speed bicycle. My first little hints of my transsexual self were much like learning how to ride a bike; playing dress-up in my mom's old clothes that I found in a box in the garage, and trying to apply her lipstick in the bathroom mirror. Funny enough, it was close to this time that my dad had bought an old bike from Goodwill (the assigned destination for the clothes I had been wearing from that box in the garage). It was a 24" bike, and much too large for a five-year-old. Nevertheless, I did learn how to ride it - even though my legs were too short to be able to push the brakes back properly. I couldn't stop the bike, and I couldn't stop my "desire" to be a girl, either.

The irony does not escape me that, without training wheels, I accomplished my breakthrough moment of riding on my own just as I kept my gender "secret" to myself. Dad did give me instruction for riding a bike, but not for a bike that was too big for me, just as he tried to raise me to be a man (a little one, anyway). I took it all in, dutifully, but I came up with the necessary modifications by myself. In retrospect, I'm sure that my parents had become aware that I was not completely displaying the more-masculine traits of a little boy, even though I was trying so hard to conform to their expectations. My ability to stop my gender identity was as difficult to do as it was to apply the brake on that bicycle. So, I was stuck in first gear (the bike only had one) with my only way of stopping being to either crash or fall off. By the time I had the opportunity to ride a 10-speed bicycle, I was no longer crashing, and my ability to keep from falling off the bike matched my ability to walk effortlessly in Mom's high heels.

The bike belonged to the older girl next-door (a girl's bike!). I learned much from her about shifting gears - both on the bicycle and with my gender identity. Stopping was no longer the big issue, but learning to use the proper gears in order to climb the hills was something else. The hills I have been negotiating since then have been mostly of my own making; marriage, children, establishing my male persona within the community.

I worked hard to be an "A-lister" in those categories for years before realizing that I was in the wrong gear. At the same time, though, I was stuck in first gear with my gender identity. It could have been easy enough to maintain my "A-list" standing as I (falsely) presented my male self, while still being accepted by the "A-list" cross dressers; or so it may seem to others. I cannot see myself as belonging on either of those lists, however. To climb the hill, then, I must continue to up-shift, being careful to know the right gear to use, as well as the proper timing in shifting to that gear.

Thanks for the great comment Connie!  From my own humble perch on the bike, I never saw the possibility of ever escaping my gender turmoil, did very self destructive things to myself and finally made it to where I am today.  I just couldn't get by putting on women's clothes and thinking I was a complete person.

The next companion post to this one will be "Gender Survivor".  If you have a comment, I would love to read it! Send it here, or to my email - cyrstih
at May 10, 2014 No comments: