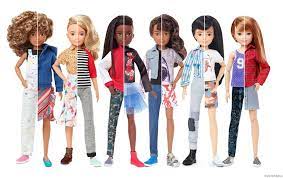 On occasion I feel as if the term "gender fluid" is a relatively new term. In fact those of us in the more mature age range remember when transvestite was one of the only words we could use to describe ourselves except maybe cross dresser. Then, along the way, the transvestite term was shortened to "tr_nny" which became a gender slur in some parts of the world.

The reason I bring up the gender fluid term in today's post is I heard it re
cently from an eleven year old person on national television. They said they didn't know what gender they were. I quickly flashed back to my youth and knew I felt the same way. In fact, I have written extensively in the past the number of mornings I woke up not wanting to be a boy anymore. On the other hand when I was successful doing "boy" things I enjoyed it. Definitely gender dysphoria at it's most severe. From a time before gender dysphoria was even a term. Plus, I can't even imagine having such an understanding and supportive set of parents.

As I grew, served my time in college and the Army I prefer to think I "grew" into the transgender term too and out of being gender fluid. Once I experienced being around other so called heterosexual cross dressers, I learned there was a whole other level of individuals who loosely identified as transvestites. These persons were the impossibly feminine visitors to the mixers I went to. They just didn't fit. Somehow they were out of place.

Soon I discovered I felt out of place too. I certainly didn't fit in with the ultra masculine men in a dress crowd and barely tried to hang out with the "A" listers as I called them. I tagged along on the adventures they embarked on after the regular meet ups. I discovered a wonderful world of gay clubs along with the chance to live my life as a feminine being.

All of this decidedly terminated any chance of my gender fluid tendencies but not quite. Even though being feminine felt so natural, going out with friends cross dressed as a man felt good on occasion also. I guess you could say any traces of gender fluidity for me was becoming toxic.

Finally, I couldn't take it any longer and took advantage of several drastic changes in my life. I put my suicide attempts behind me and started hormone replacement therapy. Which once and for all forced my male self into his closet.

It also ended any lingering ideas of being gender fluid.