Well, in my family, Thanksgiving Day has come and gone ushering in the commercial frenzy of Christmas (which if I live long enough, will start on Labor Day in September!) Yes, there was also the too bountiful meal with bunches of kids, way too serious discussions on politics and sports.

I have become in many ways the androgynous patriarch of the family who lost my significant inheritance in a failed business and a wife of 25 years. Nearly eight years ago, around Thanksgiving.

I used to be the "elephant" in the room with my transgender secret that most of the family thought they had an inkling of. In the past, I had a tendency to just be passive in my participation, not knowing from one year to the next when my androgyny would lead to a full time "hey look at me Thanksgiving." 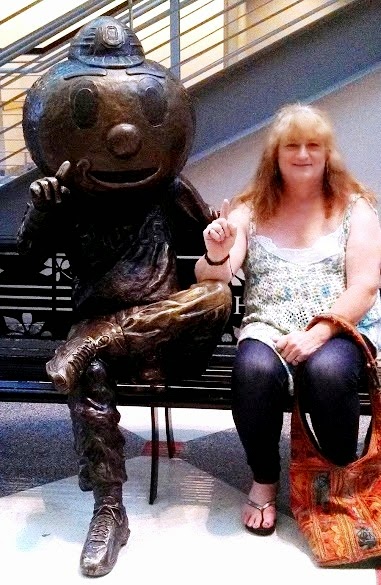 The fun part this year was interacting with several of the older grand kids (12-17 year old range).  Of course I already knew how incredibly diverse my two oldest grand kids are but I didn't know about my brother's 17 year old grand daughter. Along the way, we were able to duck the political speeches and talk about her studies of different religions such as Islam, Buddhism and Hindu. She didn't know that in another life in Thailand, I was best "man" in a Christian/Buddhist wedding and considered myself "follower" of the religion until Liz began to interest me in earth based religions. As it turns out she hasn't been "polluted" by a parenting system who has encouraged her to think.

My 13 year old grand daughter doesn't say much but my 10 year old oldest grandson does...and stuck near my side most of the day.  To catch you up, he is the one who had a very out gay man for a fourth grade teacher a couple years ago. Not so long ago he proudly announced to my daughter how proud he was of me coming out as gay. My daughter said "not gay-transgender" and proceeded to explain the difference.  Fortunately, he seemed to become even more inquisitive about me.  Yesterday we had a quick conversation on a serious side about how he has ran into a few anti-Jewish remarks in his sixth grade class.  I said unfortunately haters are lurking around everywhere and told him about my encounter with "GSB" (gender slur bitch) as my example.

Being who I am too, I tried to get my daughter to let him and his younger brother come watch The Ohio State-Michigan football game Saturday with the family.  He would surely learn how hyper sports fans can reel off a set of cuss words in a record minimum time.  For those of you who don't know, "the game" is nearly a holiday here in Ohio.  As far as my leanings go, all you have to do is look at the picture above. It was taken last May at the Trans Ohio Symposium in The Ohio State Student Union with mascot "Brutus Buckeye."

So, today presents itself as a brief respite before "the game" at noon tomorrow and "the drag show" Saturday night.  More on that in a later Cyrsti's Condo Post!