All the Colors of a Weekend Rainbow!

I believe this weekend, I got a little warm up to what I should experience at all the TGLBQ Pride events coming up around me in the next couple of months. Following a week which went quickly but was a "grinder" (for both my partner Liz and I)  we decided to check out a "mixer" of sorts for CrossPort   which is a Cincinnati, Ohio based transgender support group.  Although I am an atrociously poor "mixer" because I have been innately very shy through most of my life, I really wanted to step out of my comfort zone and hopefully meet other transgender women or men. 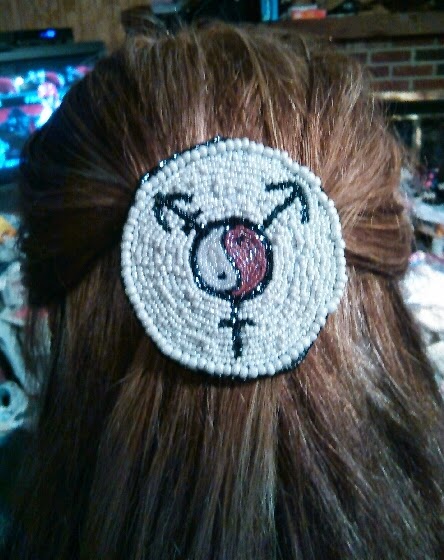 Did I? No I didn't, and here is my excuse.  First of all, I think there may have been a total of six or seven trans women who filtered through the gay venue we were at between eight and ten and then suddenly left.  Of the group I was only able to make solid eye contact with two or three-who abruptly turned away.  That's it and poof! the group vanished to who knows where and by the time Liz and I began to notice they were gone, we were having such a good time, we didn't notice. So yes I was a social failure yet again and if you read Cyrsti's Condo and you were at Shooter's Bar downtown, I wasn't being a bitch and not trying to say hi!

On the bright side, I did get a chance to wear my hand beaded transgender hair barrette (Liz made it) last night with the "Yin and Yang" center logo-as you see here on the back of my noggin.  If you want one made for you, let me know and I will pass on all the information on costs and timing you need to know! I plan on letting my trans pride flags fly at Pride!


So, other than the trans sisters I did see and I few others in the bar who we thought were transgender, the other colors of the rainbow were represented too.  Shooter's itself was unique to me because it was the first gay venue I had ever been in which went from country line dancing music to a drag show.  Liz and I have a little country in us, so the music was OK but then again maybe not for the other trans girls? Like I said, we became so immersed in the art form of removing jello shots from tiny plastic cups with our tongues, we didn't notice much else except- my favorite game, "spot the genetic woman."  After careful consideration, as the evening progressed (or regressed) we figured there was one other transgender lesbian couple in the bar. ( A trans/genetic couple like we are.)

Liz managed to trash me on the jello show dexterity contest and kept her "boy toy" jello shot person busy as the queens arrived to get ready for the drag show. When show time neared, the place began to thin out as several gay male "bears"  took off. and a few lesbians filtered in.

At the least last night,diversity was very diverse at Shooters.  As were the jello shots!