I really like this story! It comes from a site called "Gun Shy Assassin"
I have to tell you I'm not the biggest "metal music" fan although I did lose some hearing to "Black Sabbath" when Ozzie Ozborne was lead singer. 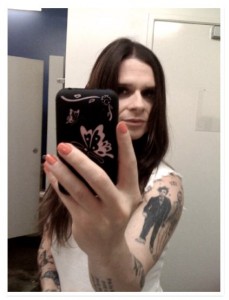 "Gun Shy Assassin" actually picked the story up from The Advocate who interviewed transgendered singer Mina Caputo, who  used to be known as Keith Caputo. The article centered about her new life in a band like Life of Agony.
As I read on, the article began to bring up a few very familiar themes. Mina said: “I was very boxed in that metal thing. The first album I’ve ever done was released and then it pretty much exploded in Europe and I kind of had no choice but to leave school. I didn’t want to sing in a band. That wasn’t really what I set out to do. I wanted to go to Julliard. I wanted to play the classics, get good grades…and I pictured myself living more of a feminine life then at 19 when this whole alpha male world just pretty much took over,” she said.
“I was in hell for years…It was more of a sense of responsibility and not getting labels down… the management, the band, and the fans. And I mean, we were a really, really really, really big band. We were doing concerts in Europe where 60 to 100 thousand people were showing up.”

Sound familar? Sure! Perhaps you like me tried to play the "alpha male" game.
The real impact of "Mina's" story to me is yet another visible person in our society has stepped forward to educate others on a positive level.
From women such as "Stana" at "Femulate" speaking to college students to entertainers such as "Mina" and "Chaz Bono"  telling their stories: the world will be eager to listen and learn!