Recently I wrote a post called "A Bridge too Far" here in Cyrsti's Condo. Along the way in the post about novice transgender women facing the difficult task and decision to fully come out of their closet, I left out a very important point.

"Most of the things we are frightened of never happen! I suspect that it is fear that held a lot of back, yet it is also our example that it makes it all less scary for those following behind us.

Despite what the haters and the popular news media might like us to belief it is my experience that the vast majority of people, especially cis women! will be our supporters, our helpers, and our defenders. They understand that that they lose nothing, no rights, no security, by accepting us into "the sisterhood".
As I said, great points. Thanks Paula.
at October 05, 2021 No comments:

As The Bureaucracy Turns

As you may recall, today marked yet another of the latest milestone days of my 'Mtf gender marker" journey.

I was happy to see the State of Ohio sent me the approval to switch my driver's license from a 'M' to a 'F' (for a fee of course) and I plan on getting it done early next week. But, As I checked with my therapist at the Veteran's Administration today-I was still a "female called a male name." Ala Johnny Cash's 'A Boy Named Sue.' I sort of figured the VA would take a little more time to untangle itself and get the proper changes done. The privacy officer said something to the point of my name change had to go through some sort of committee to be signed off to prove I am not some sort of terrorist. I could change my gender easily enough but not my name-go figure.

However, the biggest surprise today though came in my mailbox.  I got my paperwork to turn in with my IRS Taxes saying indeed I did have coverage through the VA. It was addressed to "Ms. (insert male name) Hart"

With any luck though, I should have a brand new shiny female drivers license by next week!

This is far from a new story. In fact it is from 2010 but it bears revisiting. 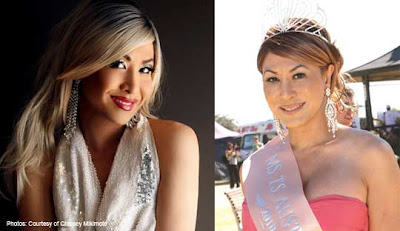 It actually came from "AsiaOne's" Diva site for women and features Ms Chelsey Mikimoto who was born in Singapore to a Malay-Dutch mother and a Chinese- Japanese father. She migrated with her family to Australia in the mid-90s at age 10.

Much of her story sounds familiar: "Although born biologically male, Ms Mikimoto said that she never identified with being one. Growing up, she liked girlie things. She dreamed of parading in beautiful gowns and experimented with her mother's make-up and clothes. One Christmas, she placed her name on the Barbie doll meant for a female cousin.
She had visited a psychiatrist who diagnosed her with gender identity dysphoria - a condition in which individuals identify emotionally and psychologically with the other gender. For five years before the surgery, she lived as a woman. During that time, she underwent hormone replacement therapy to feminise her facial and bodily features. Other than physical changes, she also took the time to "greatly reflect" on what it meant to have the gender change."

I haven't been able to find much recent information on her, so I hope all is well!
at December 07, 2012 No comments: