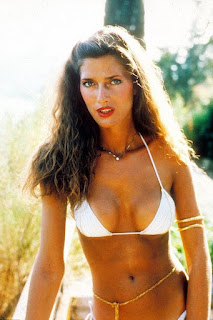 Caroline Cossey, also known as Tula, made headlines as the first transgender model to pose for Playboy magazine.

Prominent throughout the ‘70s and ‘80s, Cossey worked with major fashion magazines and small brands, even appearing topless in denim ads. Her big break came with a cover spread for Playboy in 1981, which led to her role as an extra in James Bond’s film For Your Eyes Only.

After being outed by a British tabloid in 1991, she made a comeback by posing for Playboy again, this time in a solo spread that dubbed her a “beautiful woman who was born a boy.”

Back in the day, there were talk shows  (even Springer and Maury) which took a fairly serious look at the world and the people in it.  One was Caroline Cossey (Tula) the beautiful transgender model and actress who made an appearance as a Bond "007" girl.  This video on the Cyrsti's Condo big screen goes into her life after she was "outed"