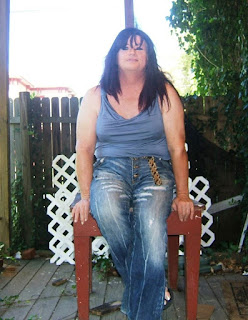 Thanks to the wonderful people at Facebook, recently they pulled up this ancient picture of me in the summer of 2014.

In many ways I consider this a transition photo. I was moving away from being a blond and closer to wearing my own hair.

What you may not see in the picture is the torment I suffered from the wig's hairline. It's one of the few wigs I ever owned I even took a pair of scissors to. It's a wig though which brings back fond memories.

I wore it to my first "girl's night out" when I was invited by a group of young women I had met at one of the venues I frequented many times. Even though I was scared to go, I also was excited to tag along also. I put together one of my black outfits with a tank top and a long black skirt with a slit up the side. It turned out not to matter much as the younger more attractive women received most of the attention anyhow.

I had more luck when I wore the same outfit (and wig) to a big gay venue one night to meet a couple of friends. One was a trans man and the other a lesbian. I ended up having a fun evening and asking them to accompany me to my car when I was leaving. I had learned the hard way not to walk around the venue by myself.

Now, back to the picture. What I do like is my expression. I feel as if it gave me an impression of strength. The breasts of course were not natural. They were mine only in a sense they were given to me as a gift years earlier from a cross dresser who was purging his storage shed. Plus the way I was sitting only gives a slight indication of how over weight I was at the time.

I am sure you have to be transgender to put so much effort into breaking down an old picture.