I received two great comments about the Cyrsti's Condo post yesterday which primarily revolved around accepting compliments and hair. The first came from Paula across the pond in the UK:

"I found that it was only when I abandoned the wigs that I began to truly be me, before that I was always playing a part, maybe it was two different parts, but still playing acting. When I could start wearing my own hair it became real!I think the thing about compliments of common to a lot of Trans women; we were programmed like men, we were expected to give compliments not to receive them, it goes against all our conditioning to simply accept the compliment and say "Thank you".

Excellent points Paula! As I wrote before, I was exceedingly bad at attempting to buy the right wigs. For the most part, I was either trying to go more blond or with more hair than I could pull off.

Now, let's check in with Connie:

"I was once told by another trans woman that I would never be able to transition successfully because I wear wigs - no better than a "professional cross dresser," she said. Having a good head of hair is definitely a luxury for a trans woman, but it's certainly not a necessity. I know that I am, at least, more of a lady than she is, and some people may be no better than a "professional bitch," I suppose.
I receive compliments on my hair from time to time. Some may not know that I'm wearing a wig at all. A friend I've known for five years did not realize that I wore wigs until just a few weeks ago. She had invited me to spend a girls' weekend with her at a nearby casino, and I must admit that I accepted the invitation with some trepidation. I was flattered that she felt accepting enough to be sharing a hotel room with me, a trans woman, not to mention that she also felt safe enough to be doing so. I wasn't sure how I was going to conceal all of the causes of my dysphoria, including my bald head, and her touting the wonderful pool and spa that we could use did not help. I finally told her that I don't swim because of my wig, and I don't think she thought any less of me for wearing one.It's been years since anyone has seen my bald head. Even I will spend as little time as possible looking at it. If it's not a wig on my head, there's almost always something covering it - whether it's a turbine or just a towel wrapped around it. I will sleep in a wig if there is a chance that someone may see me. I did it with my friend in the room, and I even left my eye makeup on for good measure. Everything else was covered up, too. ;-)"

Thanks Connie! I think Stana of Femulate  blogging fame is another transgender woman  who does an excellent job with her hair and shows having your own hair is not a necessity for a successful Mtf transition. In fact it sounds like one of those "I'm more trans than you" statements. 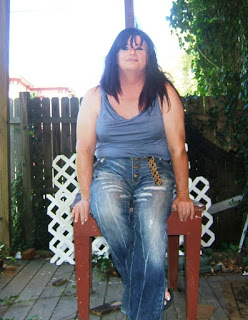 I'm sure too, since I have opted not to have any genital surgery some would think I am no better than a professional cross dresser too. Regardless, I have decided to do the very best I can!

The picture to the right is one of me in one of the few wigs I bought I really liked.
at December 03, 2019