From "Bilerico" comes the story of "Jennifer" a transsexual veteran returning home. 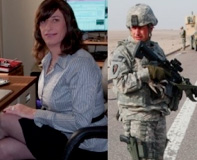 In April of this year, Jenn will complete 29 years of service to her country with honor and distinction. To recap from my previous posts, Jenn began her transition by starting hormones 2 years ago thinking she'd retire from the service after 27 years but Uncle Sam needed her service in Afghanistan. Jenn continued to take her hormones for the entire tour, in fact, in December of 2010 when her prescription was running out, a military doctor in country provided Jenn with a renewal of her prescription! As evidenced by the Army's bestowal of a "Bronze Star" and promotion during her service in Afghanistan, the hormones had no impact and Jenn's ability to do her job.

Jennifer has some solid recommendations for the U.S. Department of Defense as our community presses for transgender-inclusive reforms. She says trans service members should be allowed to transition after "at least six years with a good service record."
Jenn believes that only "career-minded" service members should be allowed to transition if the military is going to pick up the tab for hormones and surgery, with "no retraining required." In other words, a transgender service member must be able to do the job they already have in order to be allowed to transition and stay in the military.
At issue now, however, is Jenn's promotion to Sergeant Major, something she's worked diligently toward achieving these past 29 years. The Army wants her to stay in another three years to complete training for this highest non-commissioned officer rank, which would, of course, mean putting off her transition to living full-time as Jennifer until those three years are up. Jenn says she'll probably retire this spring, which will likely cost her the promotion to Sergeant Major.

Being a transgendered veteran myself, of course this story was of great importance to me!
Follow the link for more!