Another "Not So Average" American Girl 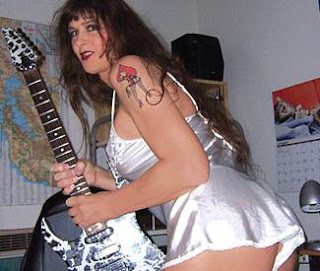 This is another story I discovered from the "San Fransisco Bay Guardian".
"Christine Beatty" pictured on your left is "a transsexual activist, author, and good-time girl, Beatty just published her memoir, Not Your Average American Girl on her newly christened Glamazon Press (available at Modern Times bookstore in the Mission, www.mtbs.com). In it, she tells her story of growing up and discovering her inner self during a very turbulent time in Northern California, through the stoner 1970s to the economically rocky '80s to our own time, when trans people have gained an unprecedented visibility yet still find themselves the targets of discrimination from both conservative quarters and other LGBTs."

Here's a small idea of where the book came from and how it came to be:
"It's a wonder that Not Your Average American Girl exists at all. It meticulously recreates scenes from Beatty's experiences using entries from the journals that she's kept all her life. And really, if your mortal coil encompassed typical suburban mama's boy, stoner hippie, macho soldier, undercover married cross-dresser (or "frilly werewolf"), Tenderloin call girl, recovering heroin addict, pioneering rock musician, and author-publisher, how legible would your diary be?
"When I went to write the book, I looked at these old journals and I was filled with gratitude," Beatty said. "I was so scared, hopeless, resentful in parts. But I see how far I've come and I'm still alive. And I must have known I was going to survive — otherwise why the hell would I write all this down?"