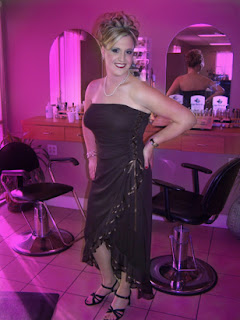 If you are familiar with "Pink Essence" you know it is arguably the "gold standard" of transgendered social sites. The driving force behind Pink Essence is "Chloe Prince". The transition from "Ted" to Chloe" was documented several years ago by ABC's Primetime.
I am a member of "The Pink" and wonder on occasion how it would be to publicly air such a personal family issue?
What if some media entity stumbled on my little part of the web and contacted me?
As public as the Internet could be it obviously doesn't come close to the intense media glare of a hungry reporter or producer looking for a television story.
So, I don't know. I've always thought that going stealth did no one in our community any good. Then again, going out and screaming I am a transsexual woman wouldn't either.
I know in Chloe's and so many other transgendered women's lives, family has to be factored in.
When "Dad" is featured changing to another female figure in the family on national television, does that make her a "celebrity" of sorts? Does that help the kids whose friends probably knew something anyhow? How about the rest of us?
Did Chloe help me last night when the new bartender at one of my favorite hang outs was falling all over herself to meet the transgender regular?
Indirectly, I'm sure she did and how do I pay that forward? So if the media did come knocking at this transgendered girl's door, it would be immensely satisfying to say yes tell my story if it's done in a positive way.
On the other hand you "stealth" girls are OK too. Who needs the hassle?
Let's not confuse "stealth" with the closet. How many more transgendered girls are taking tentative steps out from their closet's because of the Chloe's of the world.
I'm sure she and the rest of us will never know.
One fact is certain, she was so very brave to do it. I wonder if I could.