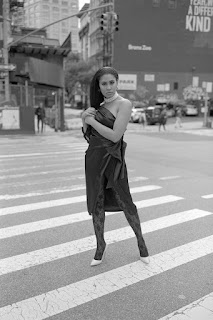 Leyna Bloom (left) moved from Chicago to New York City in 2008 at the age of 17, ready to make something of herself.

Finding a place of acceptance in the underground ballroom scene and taking inspiration from models such as Tanay Pendavis and Tracey Africa, Bloom served face in Harlem dance halls

From there, she appeared in a cover shoot for Candy alongside other trans icons including Janet Mock and Yasmine Petty. In the past few years she's starred in major fashion campaigns and walked runways, and in 2019, she made her on-screen debut in the Martin Scorsese produced Port Authority. It's submission to the Cannes Film Festival made her the first trans woman of color to star in a movie in its 70-year history.

Of course also, there was her famous "Sports Illustrated" cover!