Connie wrote in with more restroom hints:
"At our age, carrying a Tampon and offering it may be grounds for suspicion. Carrying and offering an incontinence pad may work, however. :-) Also, since - no matter how many surgeries we would get - we will still always have a prostate that is often affected by age. So, flow may vary. I had a cross dresser friend who used to describe what she heard in the ladies room as a "cow pissing on a flat rock." I could never duplicate that sound, especially when sitting. But then, I almost always squat, as I don't really like sitting on pubic toilet seats. When it's a unisex facility, I especially won't sit, since there are plenty of guys who won't lift the seat, just as there are guys who won't put it down. 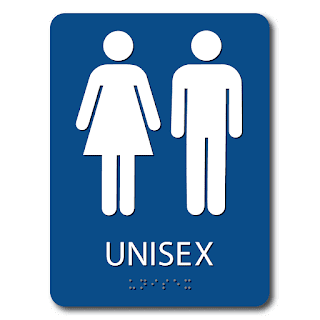 Another thing to remember, especially when wearing pantyhose, is to always check to be sure you have not tucked the back of your dress. I did that once, in my fledgling days, and a woman ran to warn me just as I was going out the door into the crowded lobby of a theater. As if that wasn't bad enough, I also had a ribbon of toilet paper stuck to my high heel. Needless to say, any attempts I'd made to not be noticed while in the restroom were completely blown as I tried to leave!"
I neglected to say I carried the feminine hygiene products way back in the day when I was younger and could have been perceived as still needing one. Plus, I wanted to be ready for the first snarky cis woman who asked me for one.
I also appreciate the dress in the pantyhose comment, as it has happened to me too. Also, the long skirts I own and specifically the two maxi dresses in my wardrobe totally intimidate me in the rest room.
Even with all these ideas, I am sure there are a couple I am missing. Of course cis women have most likely lived through all of these "Girl Code" bathroom debacles too and could add their own... like what do you do when there are no paper towels after you wash your hands.
If you have anything to add...please comment! Thanks as always for yours Connie.
at April 17, 2020 No comments:

Susan Lee was kind enough to send in this You Tube video on Girl Code "Southern Style." Thanks!!!!
at April 11, 2020 No comments:

A passive aggressive compliment sounds like a contradiction in terms-right? Very much not so in the world of feminine communication and interaction.

I used to write about the feminine socialization process more here in Cysti's Condo than I do now. Of course the more you do it, the easier the process becomes. Plus, as an added bit of spice, when you throw my transgender status into the mix-everything gets more interesting! Women just don't know exactly how to take me.

First of all the "passive aggressive" feminine dynamic is well understood. A man's power system is based on an internal sense of power.  Can he out muscle, out spend or in some other direct way "win" over another guy-easy to comprehend or I will smack you.

But as with most all human existence women have a much more complex approach.  As I have written here, I'm much more likely to have problems with other women in the world but rarely face to face. When a face to face does occur though many times the process is the other woman sizing me up. Years ago,  these were my first experiences with a "passive aggressive" compliment.

Ironically, the whole process laid dormant in my noggin full of old stuff area until a couple of television shows reawakened my interest. Specifically, Comedy Central has a show with comedian Amy Schumer. She has a very funny but true compliment clip and you can go here to see it. The other show is called Girl Code on MTV and many times their whole show is an indirect lesson on feminine communication.

Both shows reinforced my earliest communication lessons. I learned to not listen to the words as much as how they are spoken- and more importantly what was not said.  Here's an example. I could be wearing the ugliest scarf ever but that very scarf could have been the conversation starter with a woman I didn't know.  Indeed she may have been using the passive aggressive compliment on my scarf to do a little research on me.

Regardless of what you regular readers may think, sometimes I am a quick learner. Rapidly I too played the compliment card and I began to really enjoy the mental jousting.

If I am going to joust, I figure I need all the information I can find and recently Girl Code on television and theFrisky on line keep me really up to date on how younger women view their own communication-with each other-with no men in the way. The process works for me since of course I missed so much feminine interaction in my life and I'm trying to learn and catch up.

Oh, by the way- you look great and I know you knew all of this and I really do like that new scarf you just bought and.....