As Halloween rapidly approaches, as promised, I thought I would share several closet opening experiences I went through. These experiences were instrumental n helping me to gain courage to pursue a life in the feminine world. 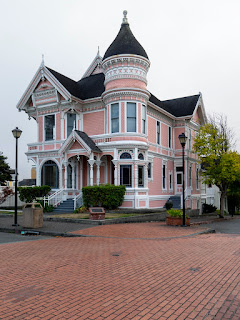 The experiences are not in chronological order and this one actually occurred a couple years after my earliest attempts at going out as a woman on Halloween.

As it turned out, a friend of mine owned a huge spooky Victorian mansion and was going to have a fairly exclusive Halloween party. I was a fairly well known radio DJ and somehow made the cut for an invitation, along with one of the news girls.

To make a long story short, I had a great time. I ended up going with the news person somehow instead of my wife. One of the few times she left me unattended. It was first page news when the news girl saw my "costume" all the way down to my freshly shaven legs. It turned out the evening was only going to get better.

The party was well attended and everyone I encountered remarked how "real" I looked, especially one of the area's up and coming politicians and his wife. They wouldn't leave me alone, all the way to inviting me to come along with them to another party they were attending. Since I didn't drive myself that night, I said no and decided to go back with the news person who drove to the party.

Needless to say, the whole experience was a prime case of gender euphoria for me. At the least, I found I could present in the world as a feminine person. The down side came the next day when I had to return to my boring male world. Except for questions at work about my so called "costume", which I quickly laughed off.

I will always wonder though what would have happened if I had left with the political couple and went to another party.  Also, unfortunately I have no pictures. It was a long time ago in the late 1970's.

I did pass along a close replica of how the house looked.