Three days of this week I was involved in watching and learning from the LGBT Aging Summit which was held virtually this year.

After I finally received the proper link to sign in, I had missed the keynote speech from an acquaintance of mine...a transgender woman of color. I did however after a fair amount of prodding, made it in for the next webinar on the current state of LGBT elderly residents when they come to the point of needing assisted care living. I wish I could write something positive about the prognosis but I can't. At least, here in Ohio, the current laws do nothing to protect elderly LGBT women and men from possible abuse.

Imagine for a second if you were in a nursing home and a "well meaning" subordinate begins to show up in your room with a bible and explains she or he is giving you time to repent before it is too late. Or when you begin to be ostracized by the other residents.

As you can tell, nothing in the webinar gave me much hope for the future except for the people involved who were involved in positive changes.

The second webinar I "attended" was actually a viewing of the documentary "Gen Silent." It's actually a decade old now and includes looks at the lives of a transgender woman slowly dying of lung cancer, an elderly lesbian couple who describe the early days of navigating life together in Boston, as well as a gay couple which features one in an assisted living situation with dementia. 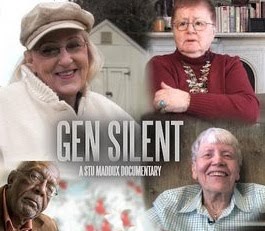 By now, you understand the documentary didn't provide much joy and happiness for the future. Especially for me because my Dad passed on from dementia. It was hell.

Perhaps the biggest problem is, things haven't changed that much for the LGBT community over the past decade when it comes to aging. We need all the advocates we can get!

After watching "Gen Silent" I felt extremely blessed to be in a relationship with my partner Liz. The transgender woman who was passing away was sadly dying alone after being shunned by most of her family.

If you decide to follow the link and watch "Gen Silent" you may want to have some tissues handy.