As I continue my Cyrsti's Condo post from yesterday, the best place to pick up the story is when I was honorably discharged from the Army. All of the sudden I had this incredible sense of freedom.

As in all freedom's though, this one carried a price. It all started with the naive notion I could continue to come out to others as a transvestite (the common term for a cross dresser) in the mid 1970's. As I have written about several times, I was soundly rejected by my Mom and from there mostly headed back into my closet.

By "mostly" I meant, only my wife really knew anything about my cross dressing desires except for a few Halloween adventures when perhaps I looked a little too accomplished as a woman in front of a few of my friends. Amazingly though my normal macho exterior I worked so hard for carried the day.

As you can probably guess, the yearly Halloween adventure and dressing up at home behind closed doors wasn't nearly enough. The formula was fairly simple. The more I cross dressed the better I became at it and then I felt more and more natural which led to more gender confusion.

About that time I learned of Virginia Prince and her Transvestia Magazine. I quickly learned I was not alone and I felt it was time to meet others like me. I also found there were mixers going on within driving distance of me.

As I attended the mixers, I learned quickly there were layers of different people. All the way from the cross dressers who were desperately trying to hold on to their masculinity by smoking big cigars in drag all the way to impossibly feminine figures.  This created yet another quandary for me. Where did I fit in?

I was far removed from most of the macho cross dressers but was curiously attracted to the fabulous feminine creatures. Of course at that time (and in many instances still do) I ended up in a middle niche I carved out for myself.

The problem this all created for me was it caused me more extreme gender dysphoria pressure. My answer was increasing my alcohol consumption, getting a divorce, losing a business and moving from Ohio to the New York City area. In other words, I was out of control...sort of. Out of the chaos came another marriage to a woman who knew of my cross dressing desires and who I was destined to be married to for twenty five years. She passed away quite unexpectedly from a heart attack at the age of 50. 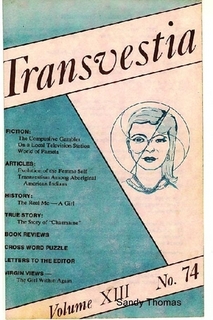 The problem with all of this was, slowly I was coming to grips with the fact I was probably more of a new term I was learning more about. Could it be I was transgender?

Being transgender meant all kinds of potential problems and changes.

The pressure became so intense it led me to try to commit suicide.