Are You Man Enough

Part three of my transgender coming of age post revolves around the toughest part of my life.

Backtracking just a bit, to the point when I discovered there were more than just one type of cross dresser. It was the most enlightening point when I went to my first "mixers." As I wrote before there were everybody from macho crossdressers to wonderfully feminine creatures. Of course, cliques were formed in the overall group. Basically, the more feminine group went out and partied after the meeting while the others stayed in the hotel.

Very quickly I determined I was going to tag along with the group which went out and partied. Ironically I didn't quite fit in with most of them either.  They were basically the "mean girls" of the group. So I did my best to look like them without acting like them. My biggest moment came the night about four of us went to a late night tavern and to the surprise of everyone a guy tried to pick me up and not them.

While all of this was exciting, it tended to make my life so much worse on a day to day basis. It was difficult to wait until the next experience. I began to wonder if I could exist full time as a transgender woman. Plus, what really happened was I took all of my frustrations out on my wife.

She was supportive of me being a cross dresser to a point. But drew the line when I went too far. Tremendous battles followed. Both of us valued the relationship too much to give it up without a fight.

One of the biggest fights came after the time I was mistaken for a cis woman when I went to a mixer in New York. After the fight, my wife came up with one of the most profound statements of my life:

"Why don't you be man enough to be a woman."  Naturally, I was floored. She had built up to the moment by telling me several times I would "make" a terrible woman. It took me years to understand she was right. On some occasions I could approximate what a woman looked like but was far removed from understanding what being feminine was all about.

After all, females are born but women are a learned societal deal.

What happened next was the gender dysphoria pressure was increasing so much I started to go out beyond the agreed to parameters of our relationship. I was allowed three days a week to go out as a girl. When my wife got a job which included working some nights...I was out the door close to the time that she was. So, on certain weeks (depending on my schedule) I could be out five days out of seven for a few hours a day. 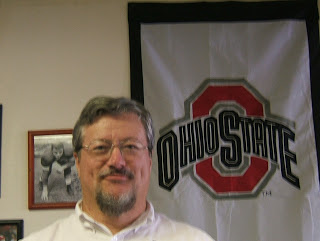 Again, all this did was increase the internal pressure on me. Finally to the point when I took a whole bottle of pills one night. Obviously, they didn't kill me, so I decided on taking a different approach. I grew a beard.

Included is the hated "before" transition picture.

I was very unhappy and it was about this time several personal disasters occurred for me. I lost three very close personal friends in a two year period before the biggest shock of all. My wife died unexpectedly from a sudden heart attack.

I was lost. But from all the turmoil gradually came the idea I was free to be the real me. I was under Veteran's Administration health care and it was about that time the VA announced it would cover hormone replacement therapy. Unbelievably, all the doors seemed to open for me. I was even old enough to semi retire and not have to find a job I had to transition on.

My moral to the story is a life can change in an instant. I am a prime example.