The family started out with a BBQ tailgate in her honor in the parking lot outside Wright State's arena. Wright State is a medium sized state university in the suburban Dayton, Ohio area which has a pretty good sized arena. Much too big I thought for one high school's graduation. I was wrong though, because surprisingly, it was almost filled to capacity. 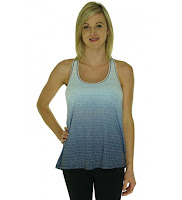 As I sat down to my BBQ, I felt overdressed in my long skirt and sleeveless "Ombre" top  The top on the model to your right approximates the style, not the color.

I didn't have time to think much about it though because about the time we sat down to eat, a light rain began to fall. We were forced to head on into the arena to get our seats. The good news was we got good seats, the bad news was we had to sit in them for three hours.

To my surprise, my Grand-daughter immediately appeared on the "Jumbo Tron" big screen in the arena and presented a topic with another girl on how the graduates were like all the flavors of ice cream in the world. Of course i wondered to my self how many of the grads were LGBTQ!

All too soon though, the graduation was over and we made our way back out to see the new graduate and head home. There are some pictures floating around and if any of them find their way to Facebook, I will share them with you.

Throughout the evening I didn't notice any stares or glances, so that was good and my Grand-daughter seemed to really appreciate me being there. What really surprised me though was the lack of tears on my part.

For another completely different graduation experience, let's check in with Connie:

"When my grandson graduated a couple years ago, I would have cried, except he was such as goofball about it, going for the big laugh on stage. I do get a bit sentimental when I look at the picture of the two of us afterward, though. It was the first time, after a few years of him getting used to the "new me," that we hugged and he put his arm around me for the pic. It's a reminder that our own transitions are so dependent on the transitions of those close to us."