Last night was one of the twice a month transgender - cross dresser support group meetings. It was sparsely attended due in no small part to a couple of regulars who are in the hospital. One had a heart attack and the other just went through a complex operation to remove a brain tumor. Both had the habit of adding quite a bit to the discussions. Fortunately (or not) I was able to step in with discussions of my own.

The first had to do with volunteering to work the front door at this years' Cincinnati Witches Ball Halloween party. As I wrote before, my request was met with shock by the lead organizer. On the spur of the moment, I decided I was not going to sit on the sidelines anymore and to hell with being trans...I was going to step up. The rest of the meeting became so dis-orientated due to internal squabbles and a very noisy young boys basketball team who disrupted everything else. At the least, I am satisfied I stepped up to help the ball and volunteer for a very important and complicated job.

For the last several years, we have also set up at Cincinnati Pride, which has become a huge event and I volunteered to get us registered for that. It too was lost in the dust of the mess of a meeting. Oh well. 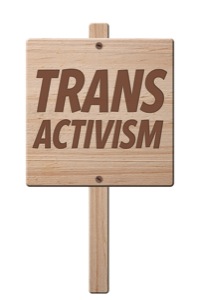 My first topic last night involved my quest to present a workshop again at this years 2019 Trans Ohio Symposium. I have decided gender dysphoria will be my central topic. My proposal has to be in by Thursday.

Ironically, one of my assumptions about dysphoria was shattered by the moderator of the group last night. When I mentioned what I was going to try to do, she stuck her nose up in the air and said she had never experienced any Mtf gender dysphoria at all. We got into a brief give and take about what dysphoria really meant and how it was possible she never felt the pulling and tugging of the two main gender binaries. It was an eye opening experience for me.

Finally, towards the end of the meeting, we somehow ended up discussing how Victoria's Secret doesn't use transgender models and even how I don't support Chick Fil A with any of my money. Of course she said she does because she considers herself a role model of sorts for trans people everywhere by proving she could eat there. I simply said since she does have quite a bit of passing privilege, her attempts were wasted because no one knew anyhow. All she was doing was contributing to the profit margins of an anti LGBTQ company. After another person said if we stop going to all the companies who don't support us, we wouldn't have any place to go. I had to step back in and point out that wasn't true either. Cincinnati alone has several big companies who are pro LGBTQ including Kroger grocery stores, Fifth Third Bank, Procter and Gamble and Pure Romance.