What's Wrong with These People?

Last night of course was New Years Eve and Liz and I had a wonderful time.

We went to two different places rode the new Cincinnati streetcar for the first time, drank some of my early beer favorites and ate some great food too!

First of all, we went to a place called the "MOTR Pub" in a restored downtown Cincy neighborhood called "Over the Rhein". If you didn't know, the City was (and is) heavily influenced by it's German past. The nice thing about the bar is, in it's Facebook page, it list's itself as transgender and LGBTQ friendly. The picture to the right is a coaster of one of the beers I was drinking which is now being brewed again.

From the "MOTR" we rode the streetcar down to the Ohio River front and our next stop. It's called the "Moerlein Lager House" and was voted last year as Ohio's top brewery. It sits between a historic bridge and the baseball stadium where the Reds play.

Moerlein is where Liz and I have gone (off and on) for the past five years to celebrate our first New Year's Eve together.

While we were there, the most amazing thing happened. Nobody paid me any attention! Even when I had to go to the women's restroom twice when I was there. What's wrong with those people? 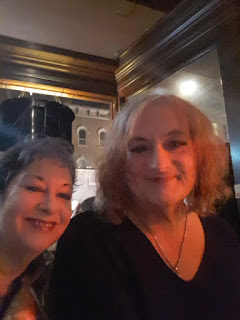 I'm kidding of course, I was deeply humbled when I never had to worry about an occasional stare or snicker here and there.

I was wearing my new black sweater, boots and patterned leggings I so love. The sweater falls loosely over my hips, the leggings accentuate my legs and the whole outfit works to make me appear slimmer than I am.

All in all, it was a magical evening with my partner Liz.

If you were able to go out, or stay in and celebrate quietly, I hope you had the chance to pause and reflect on the past year and the one coming up.
at January 01, 2019