Well, another Halloween has come and gone, and I hope yours was enjoyable.

Maybe this was the year you decided to throw caution to the wind and wear that "Wonder Woman" costume you have been fantasizing about, or just dressed feminine business casual for work. If it was the first time, maybe you discovered more about your femininity than you ever thought possible, or you found out how bad heels can feel if you wear them for extended periods of time.

If you were like me during my early cross dressing days, Halloween left me thirsting for more time dressed in public. Even to the point of considering coming up with some sort of Christmas Elf costume and looking for Santa's lap during the holidays.

Whatever the case, I ended up passing out candy during our local "Trick or Treat" time by myself until Liz got home from work. Even though we did fairly well with the number of kids who came by, I was not able to discern any cross dressing kids.

Now it's off to the barrage of Christmas movies and ad's on television and elsewhere.

In other transgender related news, we now have at least two trans women running for political office! Dana Beyer is running in Maryland for Senate, joining Danica Roem in Virginia. (House of Delegates.)

So, if you are fortunate enough to be able to lend your support this election day, don't forget our candidates!

Plus, sooner more than later one of the transgender candidates is going to break through for a victory.

Also, as you may already read, a federal court judge has temporarily blocked the Cheeto's transgender troop ban.  I am sure he is so busy circling the wagons lately,with his other huge problems,  he has barely noticed. 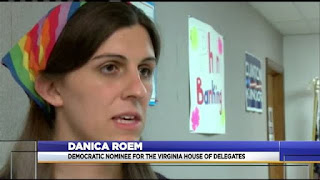