OK girlfriends and guy friends...here is a miss mash of stuff (kind of like my closet!),
Number one is another site dedicated to "transequality". The "National Center for Transgender Equality" web site features great information and even a training piece. Check it out!
Way less serious news includes "The Village Voice" reporting that "Lady Gaga" is going to do a video with transsexuals. That is earth shattering! Really? Lady Gaga? 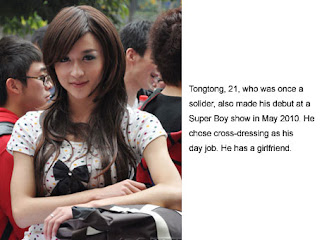 This soldier,who made the "Top Ten Chinese Crossdresser List" just blew me away!
"Back in the day", I had a friend who delighted in carrying "Mao Tsetung's" little red book. I really never believed he ever opened it, but it really upset many people... All he was looking for in our Midwestern town. Seemingly a thousand years later China is emerging as a world force and I thought we would feature a picture of one of China's former soldiers  Well, here she is!
What would "Ozzie" think! Yes that "Ozzie Osbourne". I don't really think "The Oz" is capable of a coherent thought but was he shocked when daughter Kelly ­tearfully dumped ­fiancé Luke Worrall when she found
out he was ­having a secret affair.
The heartbroken star finally ended her engagement to the model when
she discovered he was cheating with Elle ­Schneider, an identikit
blond.

now a pre-op transsexual.
Elle, 21, from Miami, revealed her secret to the Sunday Mirror, and
produced an ID card that shows she started life as Reynaldo Gonzalez.
Elle said she was open with Luke that she was born a boy and it turned him on more. Imagine that!
It seems (from my angle) this could be Kelli's fault. Her own transformation resulted in "Elle" and her looking like sisters. Maybe Luke thought that too?
at January 13, 2017