I had some sort of idea of how the weekend was going to play out gender wise, and I wasn't disappointed. Liz and I headed over to Columbus relatively early and had a chance to check in our hotel in time to relax before the evening really got started.  We have stayed at the same place a couple times for TGLBQ Pride and the Trans Ohio Symposium, so the process was fairly easy-even though my girl self was checking in and my guy self was paying. (As he should!) The front desk peeps only care though if the credit card doesn't go through. They rarely ever even look up to see my beautiful self. (kidding) 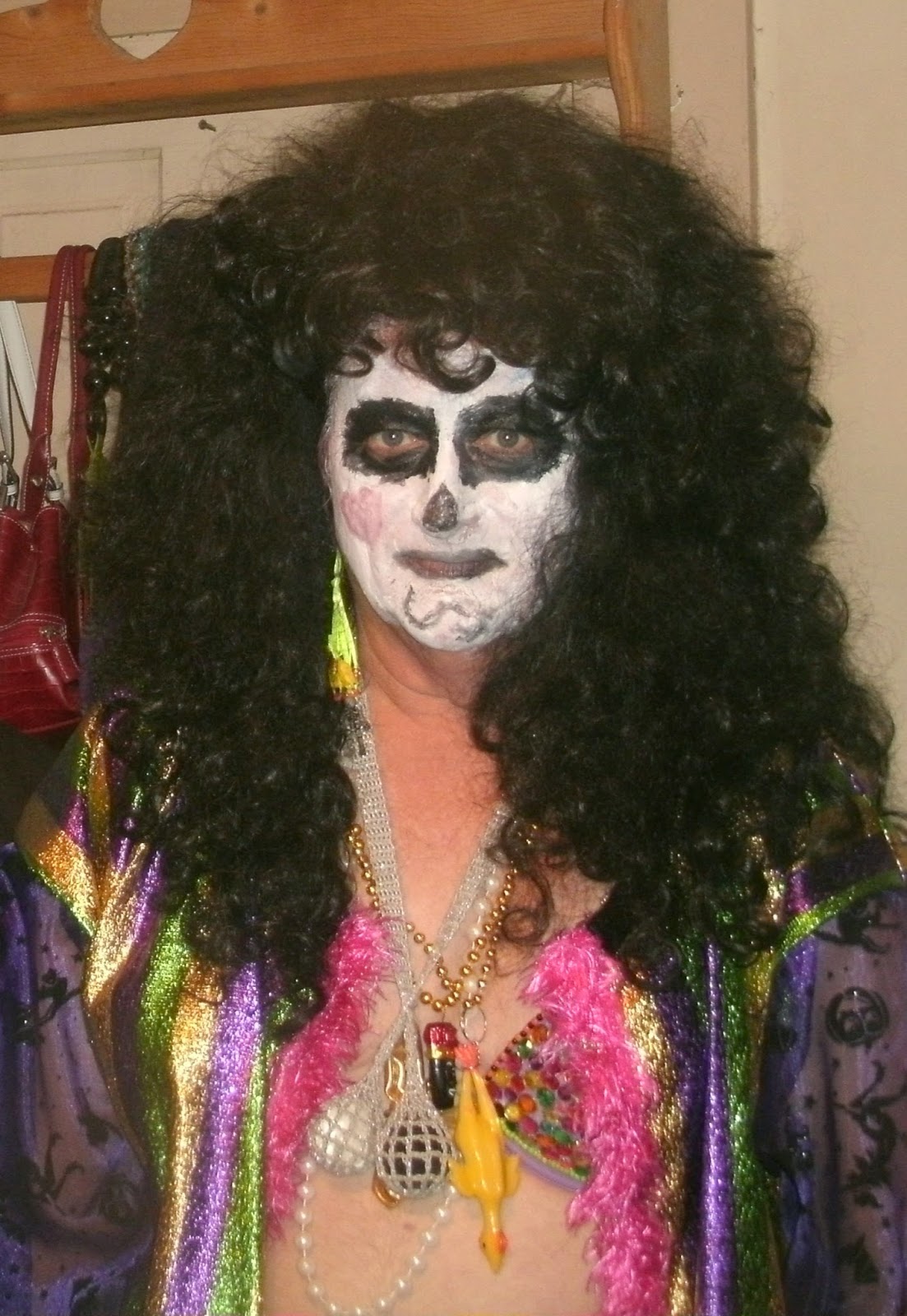 That evening, as "Madame La'Noe" began to appear, she turned out to be the rather androgynous scary person I thought she might be.

We hit the street party and I had no idea why most of the peeps were steering clear of me? (Ha!) Of course, that was no fun so I went looking for interaction. And, found it in a couple spots where I knew I would get feed back- the men's rooms in a couple of gay venues we were in. I think you all know I try to keep Cyrsti's Condo PG rated, so I'm am going to try to explain what I said to them, without going too far.  The first had something do with commenting on "The Madam's" crystal balls around her neck (You can see them in the picture to the left of the rubber chicken.) And a little gold snake I had curled around one hand and wrist, which you can't see in the picture. You can guess about any of the "ball" comments and I just asked if any of the guys were snake lovers and did they want to pet mine?

If you know anything about gay guys, they are not shy about sex talk and leaving them pretty much speechless for a minute or so was rare and I can't tell you what they did say!

As Saturday rolled around, we tried to recover from Friday night, which was a great idea- until we went out to watch the Ohio State/Penn State football game.  Because she said she would, Cyrsti became "The Madam" for part of the evening and we visited a couple of my regular Dayton spots where we could watch the game- for another one of those "shouldn't have" moments! Oh well!

Remember, we weren't even to Sunday yet and when it got here,  I had a very good idea of why I was too damn old to party two nights in a row!  Not be be denied of another beautiful day, Liz and I went to a local park.  Just to keep it interesting for the "after church" crowd in the smaller town I live in, I decided to go with a "go to hell" androgynous look. Could I have possibly still been buzzed?  My go to hell outfit consisted  of men's tennis shoes, women's jeans, unisex sweat shirt top, light foundation, haired pulled back-and bright red nail polish left on from the two nights before. Naturally, I had quite the reaction from the elderly ladies sitting in their Cadillac's watching me pump my gas. I figured after spending their time and money getting smoked by a mean preacher at church, they needed a break!

As much fun as it all was though, I figure it will take me until about Wednesday to recover, when it's beer and music night with Kim and Racquel!