"Ker Plunk!" It's time for another Sunday Edtion here in the Condo hitting your virtual front porch.  It's yet another beautiful fall morning here in Ohio 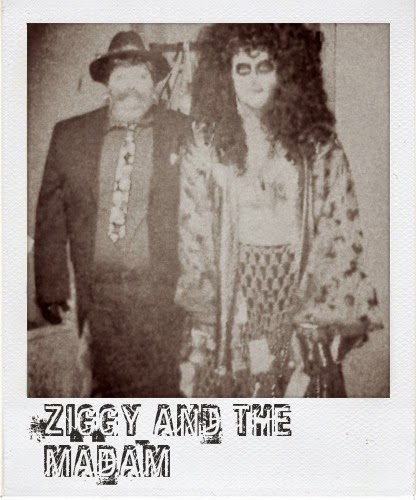 Page 1.- The Week That Was-or Wasn't. As I have written, for all intents and purposes, my Halloween for this year has come and gone.  While there are a few "activities" all next week, I'm not so sure if I could survive attending!  As promised there are a few "glimpses" into my escort "Ziggy" and I's attire at the Columbus, Ohio "Highball" Halloween bash Friday night: Including this very "ghostly one!

Page 2.- Another Way to Come Out?  Don sent this story in from "Yahoo Parenting" and the Tampa Bay Times:  Mass emails and robocalls to parents are usually about school closings or conferences, but on Thursday, J.W. Mitchell High School principal Jim Michaels had a different sort of announcement: Robert Konrad, a social studies teacher at the Pasco County, Florida, school, was beginning a gender transition. “Mr. Konrad has begun the process of gender transition and is anticipating presenting as a female no later than August of 2015,” he wrote in an email, according to the Tampa Bay Times. “As you can imagine, this is a very private decision, but Mr. Konrad has indicated that he will respond to appropriate questions you may have about the transition process.” Definately not old school!

Page 3.- Time Marches On.  Last week we briefly touched on the subject of 14 year old transgender teen Jazz Jennings being named  to the "Time Magazine" list of the top 25 most influential teens.  On the other end of the time spectrum, I read a story recently I didn't know at all, or forgot. (maybe?) From the Own Network:

Even today, there are a lot of theories surrounding Teddy Pendergrass’ car accident. All we really know was that the singer was riding with a transgender woman and was subsequently paralyzed from the accident. The people at OWN, tracked down Tenika Watson (left) , the woman who was riding with Pendergrass the day his life changed forever, told OWN’s cameras, “I never really got a chance to tell my side of things and it was important to me. Very important to me.” -