This post is fun for a couple of different reasons-food and public reactions. 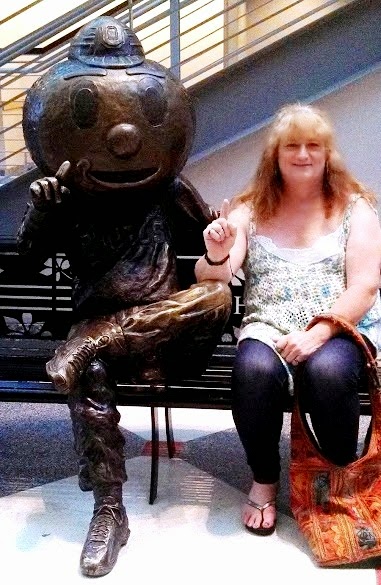 Following the main day Saturday of workshops at the Trans Ohio Symposium, it was time for Liz and I to head on back to our hotel room, take a break and head out for a night on the town in Columbus.

The picture on the left is taken at The Ohio State Student Union with the Buckeye Mascot, Brutus Buckeye.  Of interest to me is how I could tell the effect of HRT is affecting my legs-adding a rounded feminine outer layer of fatty tissue under the skin-  extending up through my hips and rear.

To make sure I didn't slide backwards, I made plans to take Liz to one of the best "burger joints" in the country that night- Thurman's in Columbus, Ohio. Thurman's has been in business since 1942 and does have tremendous hamburgers!  The only problem I ran into was I had to eat them far more femininely (with a fork) than I ever did before.

The really cool part of the visit was how I was received. Past history has told me I should be prepared for any reception from a very chilly one, to at the least a nice one from the staff and the usual rude stares from other customers.  As I have said, Columbus is a very diverse city and Thurman's sits very close to German Village which is known to have a strong gay influence- but- as we know, "gay ain't trans." .  Not only were we made to feel welcome, I felt embraced. It was like Wow! they were honored there was a real live transgender woman there. Really?  The experience was positively wonderful! Also, being in Columbus as compared to Cincinnati, fewer other guests suffered neck injuries straining to look at me. (Sorry "Nati" I love ya' but it's true.)

Finally, as several of you party peeps know here in Cyrsti's Condo, certain foods (such as a great big burger) will set you up for success during an evening of drinking.  Our next stop was to do just that at a place called Club Diversity which I have mentioned here before. The name says it all.  "Diversity" is actually in an old Victorian mansion just south of downtown and is actually part owned by a transgender woman.  If I had to guess, the majority of the clientele is of the gay male type but you can expect a nice mellow mixture of others.  Except when a group of cross dressers who meet there monthly got kicked out for awhile. (Imagine that!)