Transgender Girls in the Dating World

Recently I came across a post called "Would you be seen with me?"
The stark simplicity of the question is certainly a subject most transgender women and men have thought of. 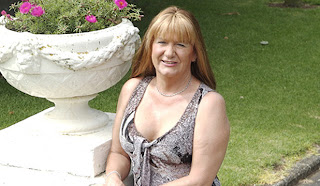 If you are out and about and date-it's an all encompassing question. Especially if you do- or are considering dating men-it's a bigger question.
Before I comment, here is an excerpt from the post written by Racheal McGonigal (right)

"So who is up for a date? It is not really the right question to be asking. It should probably be, who is prepared to be seen out on a date with me? It takes a very special man to date a transsexual and that is a shame. Believe me, men love transsexuals but being seen with them is a different story."
t is some eight years since I have been in a relationship and I miss the closeness and cuddles. Recently, I meet a really nice guy. Average to good looking, fit, can communicate, we get on. First date went well, we meet in a bar and I admit I have never felt like this before. He told me he felt the same and so he stayed the night, both of us saying it was never our intention. Next day we walked hand-in-hand around the viaduct, ate in cafes and drunk in bars. We played pool and he never batted an eye lid. The romance continued. He has come to my place and stayed the night several times but now I see a problem: he is scared of what his 18-year-old son, middle-aged beer drinking flat mate, former partner and workmates will say. He says he doesn't care, that he wants us to be friends and has similar feelings for me, but he won't introduce me to his circle. Peer pressure. Time will tell what will happen between us but he is a special man. It is a hard choice when it's the bigotry of friends that put this pressure on him."

I'm far from being an expert at dating a man.
Here's my record over the past four years: One was a prince, one moved away, one so-so and four just out and out stood me up. I'm certain I would have been twenty times more popular if I would have accepted the ever so popular "which hotel do you want to meet at?"
Obviously, I didn't have to be told I was not the kind of woman a man would bring home to his family nor did I ask. But I was also not the sexually easy stereotype we trans girls fight through.
Look, I'm sure in many ways we transgender women are experiencing the same dating trials and tribulations as genetic women. Also, my older lesbian friends tell me their dating scene is nearly impossible to be a success in (at least around here).

I've written so many times how wonderful it is to have my little circle of friends...all of whom are genetic females...if that tells you anything!