Every once in a while it is great fun just to to leave all the bitterness and cat fighting behind and just head out on "Al Gore's" world wide web and see what's going on-and have some fun!
As you regulars know I post what I call a "Horrorscope" from "theFrisky" when it is interesting and or fun. It was neither this week so I followed a link to "Manthhose" It definitely puts a new spin on male fashion!
Read on: 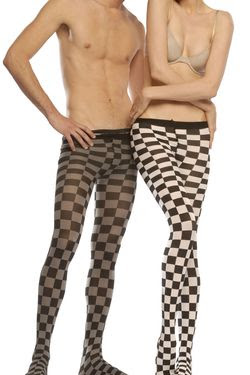 "Apparently some dudes are into wearing fancy tights these days, according to upscale hosiery retailer Emilio Cavallini, who tells WWD that purchases by men (and for men) now account for 2 to 3 percent of their annual sales. He noticed the trend about three years ago:


When we started our online shop we noticed that a lot of tights sized medium-large were being purchased by men ... So I did a search on the Internet and discovered there is a cult following for mantyhose."


But wait, there was more as I surfed on!
Under "Girl Talk" "He was the Prom Queen" caught my eye.
Here's a teaser:  "
When I received a Facebook request from a statuesque woman named “Carol Lee,” I knew the face but not the name. Mentally, I scanned my Midwest childhood, former life as a musical theater dancer, and transition into grad school. I have always loved colorful people, and she did look familiar.
“Do you remember me?” Carol Lee wrote in the message that followed.
I didn’t, until I read the next line. “I took you to prom in 1993.”
My curser blinked along with my cognitive dissonance. Carol Lee was a dead ringer for my high school friend Matt because she was Matt!
Some Google stalking revealed that Matt/Carol Lee was Orlando’s favorite drag performer in 2010, a bodacious blond who called Bingo at a place called Hamburger Mary’s.
I wasn’t amused." For more read here.

Finally, there was a short piece I saw on their rather vast site about a texting service for men where women can make a few extra dollars. To make a long story short this particular site encouraged men to ask a woman any particular question except explicit sexual ones and the fee would be automatically be deposited in her Paypal account.(PayPal is a service that enables you to pay, send money, and accept payments without revealing your financial information.)
Of course I immediately thought of a "trans woman or trans man" service. But just as quick discarded the idea when I thought the lack of sexually explicit texts would doom the service immediately. (For trans women. Can't speak for trans men.) 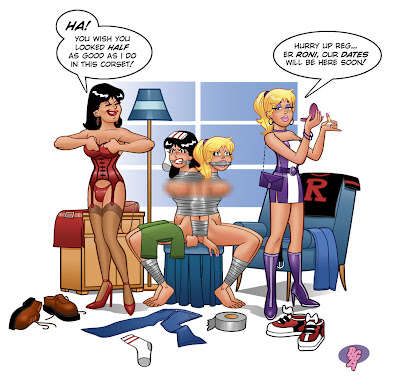 As I was blazing away through cyber space I thought of a comic book idea that probably already has been tried somewhere.  My "TransSurfer" idea would  be done in the style of the ultimate super hero comic book guru "Stan Lee".
Just think, another Halloween costume idea to dazzle your friends!
Going back a few more years, the "Archie" comic series would slip in a couple of the male characters dressed as rather attractive girls.
On occasion, Stana on "Femulate" will post a vintage picture of one of these "Archie" comic series .
The one I'm passing along is a parody  and
is not licensed by "Archie Comics" , but simply a parody of them and falls into fair use laws. It is from "feastoffun.com" if you would like to see more.