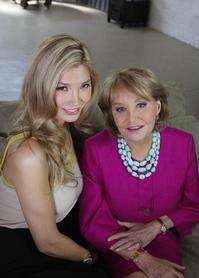 "Transgender beauty contestant Jenna Talackova speaks exclusively to Barbara Walters in her first interview since making international headlines for being disqualified from 2012 Miss Universe Canada competition because she was not a "naturally born female". Just days after the disqualification of Talackova, who was born a male but had sexual reassignment surgery at age 19, the Trump Organization, which owns the Miss Universe pageants, said it would not attempt to keep Talackova out of the competition. The exclusive interview will air on "20/20" on FRIDAY, APRIL 6 (10-11pm, ET) on the ABC Television Network. On Monday, April 9 Talackova will appear live on "Good Morning America" (7:00 am - 9:00 a.m. ET) and on "The View."(11:00 a.m. ET)."