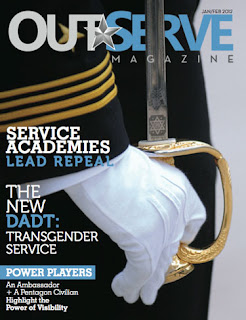 The new issue of OutServe Magazine, which is available online and at select military bases and outside of certain installations across the world, takes on what it calls ''The New DADT: Transgender Service.''
One of the six current or former service members who are transgender and profiled in the fifth issue of OutServe's publication, who goes by Bryan in the article to protect his identity, says, ''I want to speak out about it because I know a lot of people are not going to, and I feel like for anything to change … a group of people are going to have to step up to the plate and talk about it … like people did during the 'Don't Ask, Don't Tell' repeal.


As a transgendered drafted vet I can not say enough how much I admire the courage of the volunteers in the U.S. military today who are pushing the system for acceptance!