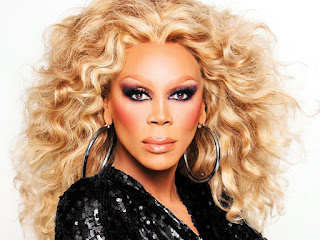 I Ru The Day

Very few things make me recoil as bad as RuPaul. To me the "thing" represents a huge part of what I'm fighting against as a transgender women in today's society and specifically in the LGB world.
Ever the one to joke at our expense to make a ratings point or an extra buck...the thing did it again last night:


Last night, October 29th 2012, on RuPaul’s All Star’s Drag Race, gay male entertainer RuPaul once again used his show as a bully pulpit to mock and misrepresent what the medical condition transsexualism actually is, despite the last few years of transsexual and transgender advocates protesting his use of offensive pejoratives such as “tra**y” and “she-male” . Comedienne Vicki Lawrence asked, “Hey Ru, what’s the difference between a drag queen and a transsexual?” RuPaul laughingly replies, “About twenty-five thousand dollars and a good surgeon.” Ha ha Pauly...old joke buddy...ha ha...have a sense of humor Cyrsti. I do. But I'm tired of this jerk even having a platform to open his clueless mouth at the expense of us. This fake makes my skin crawl and has for a while! 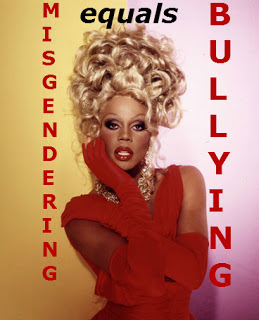 I would call for boycotts or protests of Vicki Lawrence's career but if she is on with thing there is nothing left of her career to boycott.
at October 31, 2012 No comments: