Another Transgender Day of Visibility has come and gone. As I previously wrote about I helped "man" the table for three hours for the Transgender - Cross dresser support group I am part of. It was held at the downtown campus of the county library. A portion was set up in the library and a portion was set up outside in the parking lot.

Weather wise, the day was less than ideal. To say the least, the weather was brisk. Regardless,  there were plenty of participants who attended from the community. In addition,  there also were speakers and several entertainers.

Surprisingly, even with the gray cold day attendance was still good. Although after the presentation most of the group moved to a warm place inside the large library where they had catered refreshments for us. I went in with a friend and as we thawed out As we chatted, it was difficult not to notice the complete diversity of the group.

My friend and I were on the older (more mature) end of the spectrum but it ranged from several pre teen transgender girls and boys all the way through many in their teens to us old people. As we enjoyed the food and warm friendly climate, my friend looked around and said how wonderful it was to be part of a majority for a change. So true!

To further the thought, the library even had a feature of the several "scary" books alt right politicians and preachers would like to ban. Of course it was wonderful to see such an outpouring of support. 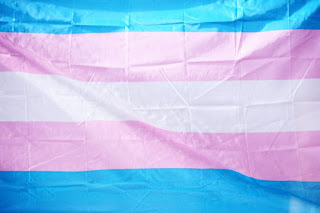 If you know anything about the politics of my native Ohio, it is important  to note the state has pockets of LGBTQ support. Take Cincinnati where I live for example. For the Day of Visibility, the transgender pride flag was flown over City Hall.

I am not going to ruin this positive post with all the negatives which still face the transgender community. Even though the weather didn't cooperate, the people did.

It was good to be out and proud. And by all means...visible! I think many times when I am out with my partner Liz, I blend too well and end up not representing the transgender community at all. I guess you could call it a version of stealth. It's one reason why on occasion I prefer on occasion being an example of what can happen if you are able to live long enough to accomplish your gender goals and live as your authentic self.

I fear some people just see the end result with me and not the fifty plus years to get here.

A brisk day downtown brought it all back into focus for me.