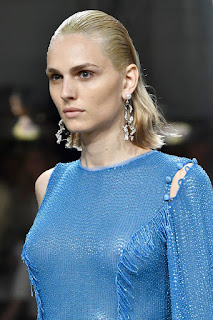 Andreja Pejic has always fascinated me as a beautiful androgynous woman who finally came out as transgender some time ago. Years ago I yearned to be just like her.

She was recently recognized as one of the most influential transgender models:

" Now one of the most recognizable transgender models in the world, Bosnian-Australian model Andreja Pejić started her career in the early 2000s as the world’s first completely androgynous supermodel, never conforming to gender norms and walking in both men’s and women’s shows for Jean Paul Gautier and Marc Jacobs.

After undergoing sex reassignment surgery in 2013, Pejić publicly came out as transgender, and has since appeared on the covers of many major fashion magazines. She even forayed into film in the 2018 crime thriller The Girl in the Spider’s Web."