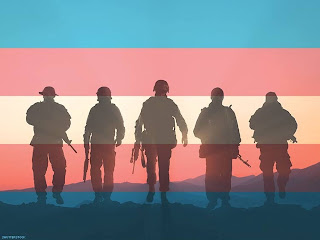 Michelle sent in an update on the recent announcement by the Veterans Administration (VA) approving gender realignment surgeries:

" Here's un update on the VA. I talked to several friends that work for the VA and help run clinics for trans people. One stated that it is in the rules and regulations that full trans care has been approved but will take time to get it written into the operating procedures. Apparently, several of the clinics here in Florida already have the personnel that specialize in trans care but the problem is that no formal trans exclusive clinics are set up. My friends say that it may take up to a year to get everything fully established. Here's hoping it won't take that long, but then again it's the government."

Thanks for the update!

As I have written before, a few of my dealings with the VA in the past have resulted in me being referred to an outside provider.  Which leads me to this point, where you are will probably dictate how fast the VA can react to this new ruling.

For example, I know of two experienced hospitals here in Ohio which do SRS. Perhaps it would be easier for the VA to refer cases to them.

We shall see. As you said Michelle, it's the government. Personally,  as far as I am concerned, I am fortunate in that I don't desire any radical surgeries to reaffirm my femininity..