Recently, I have been reading about and even know a couple people who describe themselves as non binary humans. It's my guess most of them would also be known as gender fluid or even androgynous back in the day.

Then again, I don't like to become mired in labels. Plus, as Connie has brought up in a few of her comments about how years ago, there were only two recognized genders. Then as the years progressed the transgender term became a reality. I remember the first times I became aware of the idea of a transgender person, the more it made sense to me.

All of the sudden, the impossibly feminine cross dressers I encountered at the very early transvestite mixers I attended made sense. They weren't cross dressers at all but rather, they were transgender. While we are on the topic of labels, a few of them even made the jump to transsexual and went all the way to sex change surgery. As it was known as then.

Now, I personally have gone way past the idea of operating outside of the gender binary. I am firmly in the transgender camp and have no desire to vary my existence at all back to any aspect of my previous male life.

On the other hand, I am fascinated by those who aren't and are able to be gender fluid or non binary. Hopefully, all of it represents a step forward for humans everywhere.

In the meantime, here is the transgender flag. (I think) Because these days, everything changes so quickly in the world of gender. 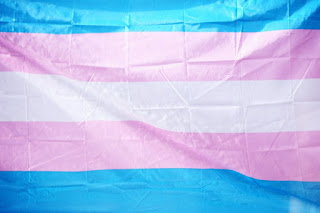